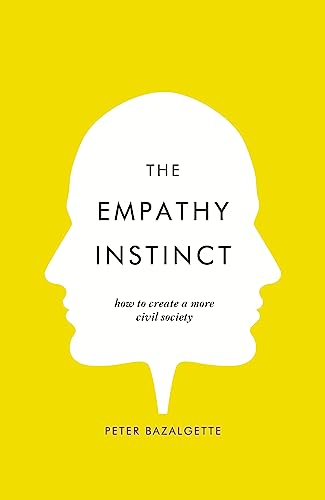 The Empathy Instinct
by Peter Bazalgette

The Empathy Instinct: How to Create a More Civil Society by Peter Bazalgette

'If we hope to meet the moral test of our times, then I think we're going to have to talk more about the "empathy deficit". The ability to put ourselves in somebody else's shoes, to see the world through somebody else's eyes . . .' Barack Obama

Empathy is the power of understanding others, imaginatively entering into their feelings. It is a fundamental human attribute, without which mutually co-operative societies cannot function. In a revolutionary development, we now know who has it, who lacks it and why. Via the MRI scanner we are mapping the human brain. This is a new frontier that reveals a host of beneficial ideas for childcare, teens challenged by the internet, the justice system, decent healthcare, tackling racism and resolving conflicts.

In this wide-ranging and accessible book full of entertaining stories that are underlined by the latest scientific research, Peter Bazalgette also mounts a passionate defence of arts and popular culture as a means of bridging the empathy gap.

As the world's population expands, consuming the planet's finite resources, as people haunted by poverty and war are on the move and as digital communications infinitely complicate our social interactions, we find our patience and our sympathy constantly challenged. Here is the antidote.

Culminating in a passionate manifesto on empathy, The Empathy Instinct is what makes us human and what can make us better humans.

Peter Bazalgette was Chair of Arts Council England from 2013-2017. He also chaired the UK Holocaust Memorial Foundation. He was educated at Dulwich College and read Law at Fitzwilliam College, Cambridge but escaped the law to spend most of his career working in television. He devised some of the biggest entertainment shows in recent TV history, such as Ready Steady Cook and Changing Rooms, and brought Big Brother to the UK. He now chairs ITV. His previous books include Billion Dollar Game and The Food Revolution (co-authored). In 2011 he was knighted for services to broadcasting.

GOR008124831
The Empathy Instinct: How to Create a More Civil Society by Peter Bazalgette
Peter Bazalgette
Used - Very Good
Hardback
Hodder & Stoughton General Division
2017-01-26
384
1473637511
9781473637511
N/A
Book picture is for illustrative purposes only, actual binding, cover or edition may vary.
This is a used book - there is no escaping the fact it has been read by someone else and it will show signs of wear and previous use. Overall we expect it to be in very good condition, but if you are not entirely satisfied please get in touch with us.