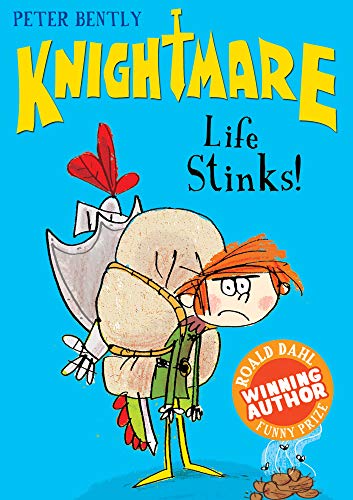 Used Price
$12.99
inc. GST
Free Shipping in Australia
Cedric Thatchbottom is a knight in training, serving Sir Percy the Proud. When the famous knight refuses to take part in a duel with his mortal enemy, Roland the Rotten, Cedric finds himself stepping up to the challenge...
Very Good

Cedric Thatchbottom can't wait to train as a squire, serving Sir Percy the Proud - a knight famed throughout the land for his glorious deeds. But this famous knight isn't all he appears to be, and Cedric soon finds himself being run ragged around Castle Bombast by his new master.
In the first book in the Knightmare series, Roland the Rotten has challenged Percy the Proud to a duel. But the famous knight refuses to take part because he's lost his lucky underpants. It turns out that Percy is lying to avoid the fight. With his new master's reputation at stake, Cedric finds himself stepping up to the challenge...
A hilarious new series following the misadventures of a trainee knight. Packed with comical characters, battles, puns and poo, these books are irresistible to boys and girls aged six to eight years.

Peter Bently went to ten different schools around the world and studied languages at Oxford University. He started writing for children soon after becoming a parent and now lives with his wife, Lucy, and children, Theo and Tara, in Devon (which has its very own excellent medieval castle). Peter won the Roald Dahl Funny Prize in 2011 with Cats Ahoy!. Fred never wanted to be an astronaut or drive a train when he grew up. Right from the beginning he knew he wanted to draw silly pictures for a living ... and some decades later, he's living the dream! Fred has worked on all manner of projects, including editorial, advertising and designing animations for the BBC. He now works mostly in children's books.

GOR005742155
Life Stinks! by Peter Bently
Peter Bently
Knightmare
Used - Very Good
Paperback
Little Tiger Press Group
2014-04-07
176
1847154336
9781847154330
N/A
Book picture is for illustrative purposes only, actual binding, cover or edition may vary.
This is a used book - there is no escaping the fact it has been read by someone else and it will show signs of wear and previous use. Overall we expect it to be in very good condition, but if you are not entirely satisfied please get in touch with us.