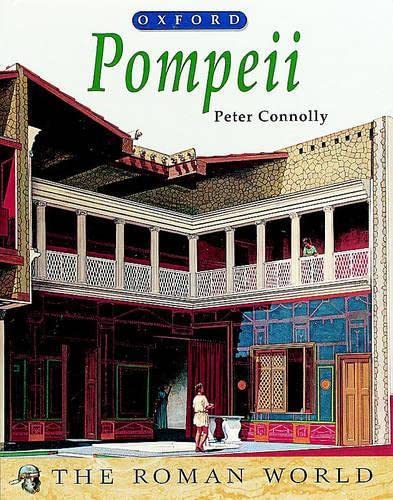 Out of Stock
$17.49
inc. GST
2000 years ago, Mount Vesuvius erupted burying the town of Pompeii beneath layers of ash and pumice. Much of the town had been preserved by the volcanic eruption, giving us a fascinating insight into Roman life. Peter Connolly brings every detail of Pompeii vividly to life with his intricate artwork, text and photographs from the site.
Like New
Only 0 left

The violent eruption of Mount Vesuvius on 24 August AD 79 was one of the greatest natural disasters of all time. Thousands of people were suddenly entombed in the town of Pompeii, taken by surprise as a layer of ash and pumice, many metres thick, rained down on top of them from the long-dormant volcano. Uncovered nearly 2000 years later, Pompeii gives us an amazing record of everyday Roman life. In this fascinating book, Peter Connolly recreates in his artwork and text every detail of the lives of the people of Pompeii. Their houses, shops, baths, theatres and more are brought vividly to life.

'Pompeii has superb illustrations, combined with a sparse text that packs an enormous amount of scholarly information, presented in a way that is understandable and accessible to the YA reader. ... for the YA reader interested in what has actually been discovered there, and how those discoveries illustrate the daily life of Romans, this book is probably the best place to begin.' John Rosser, Boston College MA. Kliatt, Nov '94

Peter Connolly was a renowed British scholar of the ancient world, Greek, and Roman military equipment historian, reconstructional archaeologist, and illustrator. He was awarded an honorary research fellowship at the Institute of Archaeology of the University College London.

Introduction ; The disaster ; Vesuvius ; Discovery and excavation ; Aerial view of the excavations ; The town and its history ; The forum ; The streets and water supply ; People and accommodation ; Inside the insula ; Houses ; Construction and decoration ; The entrance ; The reception rooms 1: the atrium ; The reception rooms 2: the tablinum ; The kitchen and toilet ; The dining room ; Dinner parties ; The bedrooms ; Furniture, lighting and heating ; The garden ; Private baths ; The street ; The commercial life of Pompeii ; The shops ; Bars and taverns ; The bakers ; The fullers and launderers ; The public baths 1 ; The public baths 2 ; The public baths 3 ; The theatre ; The amphitheatre ; In the arena ; Maps ; Glossary ; Index

GOR010437656
Pompeii by Peter Connolly
Peter Connolly
The Roman World
Used - Like New
Paperback
Oxford University Press
1990-09-27
80
0199171580
9780199171583
N/A
Book picture is for illustrative purposes only, actual binding, cover or edition may vary.
The book has been read, but looks new. The book cover has no visible wear, and the dust jacket is included if applicable. No missing or damaged pages, no tears, possible very minimal creasing, no underlining or highlighting of text, and no writing in the margins.