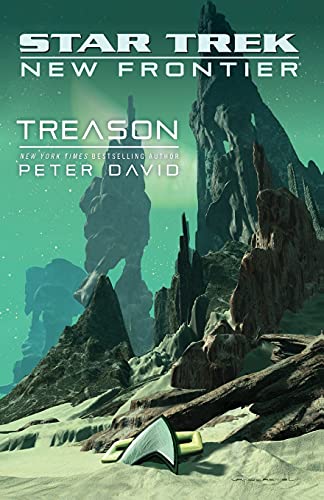 Used Price
$17.99
inc. GST
Free Shipping in Australia
A sudden power vacuum will have far-reaching ramifictions for Captain Mackenzie Calhoun, the crew of the USS Excalibur, and all of Sector 221-G.
Reviews:
Trustpilot
Very Good

Three years have passed since the events of the previous New Frontiernovel, Missing in Action, and tensions within the New Thallonian Protectorate are at fever pitch following the murder of Prime Minister Si Cwan. Captain Mackenzie Calhoun and the crew of the USS Excaliburface an uncertain future in the turbulent Andromeda Galaxy. The sudden power vacuum will have far-reaching consequences for them all, as lives and the very fate of Sector 221-G are catapulted into utter chaos.

In Treason, the New Frontierstoryline jumps ahead three years from the events depicted in Stone and Anvil, picking up again at a point of crucial change, where new and old Star Trekreaders are at the same level of discovery for the series.

"Peter David certainly knows how to excite and stun his

Peter David is a prolific writer whose career, and continued popularity, spans more than twenty-five years. He has worked in every conceivable media-television, film, books (fiction, nonfiction, and audio), short stories, and comic books-and acquired followings in all of them.

GOR001207030
Star Trek: New Frontier: Treason by Peter David
Peter David
Star Trek: The Next Generation
Used - Very Good
Paperback
Simon & Schuster
2009-05-05
352
0743429613
9780743429610
N/A
Book picture is for illustrative purposes only, actual binding, cover or edition may vary.
This is a used book - there is no escaping the fact it has been read by someone else and it will show signs of wear and previous use. Overall we expect it to be in very good condition, but if you are not entirely satisfied please get in touch with us.