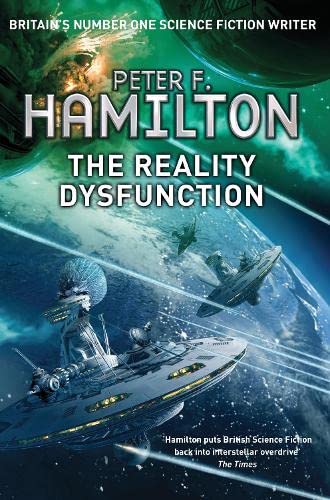 The first book in this thrilling far-future adventure from this best-selling science-fiction writer.

The Reality Dysfunction by Peter F. Hamilton is the first in a sweeping galactic trilogy from the master of space opera, The Night's Dawn trilogy.

In AD 2600 the human race is finally realizing its full potential. Hundreds of colonized planets across the galaxy host a multitude of wildly diverse cultures. Genetic engineering has pushed evolution far beyond nature's boundaries, defeating disease and producing extraordinary spaceborn creatures. Huge fleets of sentient trader starships thrive on the wealth created by the industrialization of entire star systems. And throughout inhabited space the Confederation Navy keeps the peace. A true golden age is within our grasp.

But now something has gone catastrophically wrong. On a primitive colony planet a renegade criminal's chance encounter with an utterly alien entity unleashes the most primal of all our fears. An extinct race which inhabited the galaxy aeons ago called it 'The Reality Dysfunction', and is the nightmare which has prowled beside us since the beginning of history.

The Reality Dysfunction is followed by The Neutronium Alchemist and The Naked God.

'An epic in the traditional sense of the word . . . thunderously enjoyable' Interzone

Peter F. Hamilton was born in Rutland in 1960 and still lives nearby. He began writing in 1987, and sold his first short story to Fear magazine in 1988. He has written many bestselling novels, including the Greg Mandel series, the Night's Dawn trilogy, the Commonwealth Saga, the Void trilogy, short story collections and several standalone novels.
GOR005913348
The Reality Dysfunction by Peter F. Hamilton
Peter F. Hamilton
The Night's Dawn trilogy
Used - Very Good
Paperback
Pan Macmillan
2012-12-06
1232
1447208579
9781447208570
N/A
Book picture is for illustrative purposes only, actual binding, cover or edition may vary.
This is a used book - there is no escaping the fact it has been read by someone else and it will show signs of wear and previous use. Overall we expect it to be in very good condition, but if you are not entirely satisfied please get in touch with us.
Trustpilot