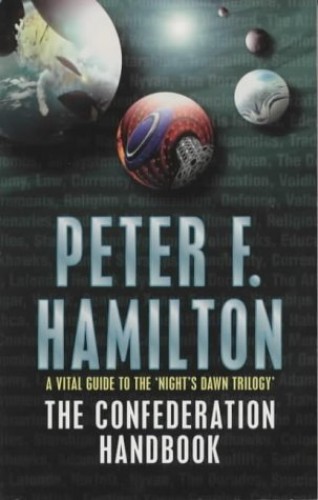 The Reality Dysfunction ... The Neutronium Alchemist ... The Naked God

Peter F.Hamilton's 'Night's Dawn Trilogy' has proved one of the best-selling Science-Fiction series of the last decade, and the most dramatically successful from a UK author.This handbook is an essential companion volume for all the countless readers past, present and future for whom this massive trilogy has evolved into a defining SF classic. It comprises general background information relating to all three volumes, with comprehensive notes and glossaries on the major characters, planets, space stations, political hierarchies, weaponry, spacecraft, invasions, and the many alien races with their diverse social economies, industries and technologies.

'From the outset, Hamilton won over the sci-fi aficionados with the coherence of his invented universe' The Times

Peter F. Hamilton was born in Rutland in 1960 and still lives nearby. He began writing in 1987, and sold his first short story to Fear magazine in 1988. He has written many bestselling novels, including the Greg Mandel series, the Night's Dawn trilogy, the Commonwealth Saga, the Void trilogy, short-story collections and several standalone novels including Fallen Dragon and Great North Road.

GOR001405943
The Confederation Handbook by Peter F. Hamilton
Peter F. Hamilton
Used - Very Good
Paperback
Pan Macmillan
2001-10-12
240
0330396145
9780330396141
N/A
Book picture is for illustrative purposes only, actual binding, cover or edition may vary.
This is a used book - there is no escaping the fact it has been read by someone else and it will show signs of wear and previous use. Overall we expect it to be in very good condition, but if you are not entirely satisfied please get in touch with us.