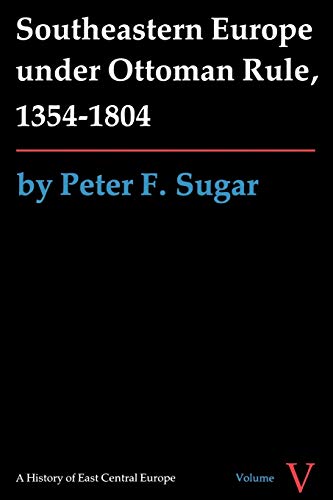 Provides an over-all picture of the least studied and most obscured part of Balkan history, the Ottoman period. This book begins with the early history of the Ottomans and with their establishment in Europe, describing the basic Muslim and Turkish features of the Ottoman state.

Southeastern Europe under Ottoman Rule, 1354-1804 provides an over-all picture of the least studied and most obscured part of Balkan history, the Ottoman period. The book begins with the early history of the Ottomans and with their establishment in Europe, describing the basic Muslim and Turkish features of the Ottoman state. The author goes on in subsequent sections to show how these features influenced every aspect of life in the European lands administered directly by the Ottomans (the "core" provinces) and left a permanent mark on states that were vassals of or paid tribute to the empire.

Whether dealing with the "core" provinces of Rumelia or with the vassal and tribute-paying states (Moldavia, Wallachia, Transylvania, and Dubrovik), the author offers fresh insights and new interpretations, as well as a wealth of information on Balkan political, economic, and social history not available elsewhere. The appendixes include lists of dynasties and rulers with whom the Ottomans dealt, as well as data for the House of Osman and some of the grand viziers; a chronology of major military campaigns, peace treaties, and territory gained and lost by the Ottoman Empire in Europe from 1354 to 1804; and glossaries of geographical names and foreign terms.

A useful, thought-provoking book . . . an excellent foundation for developing new approaches and for giving a new impetus and direction to the study of Southeastern Europe.

Peter F. Sugar is professor emeritus of history at the University of Washington.

Part One, The Ottomans
1) The Early History and Establishment of the Ottomans in Europe
2) Ottoman Social and State Structure
Part Two, Life in the European 'core' provinces of the Ottoman Empire 1413-1574
3) The Final Establishment of Ottoman Rule 1451-1566
4) City Organization and Administration
5) The Countryside
Part Three, The Vassal and Tribute-Paying States
6) Moldavia and Wallachia
7) Transylvania
8) Dubrovnick (Ragusa)
Part Four, Life in the European 'core' provinces of the Ottoman Empire 1574-1804
9) The Change of Fortune
10) The Changed World of European Turkey
11) The Final Disintegration of Provincial Order in Ottoman S.E. Europe
Part Five, General Considerations
12) Cultural Life
13) Conclusions
Bibliographic Essay
Appendix 1, The House of Osman
Appendix 2, Grand Vezirs
Appendix 3, Major Military Campaigns, Peace Treaties, Territorial Gains and Losses of the Ottoman Empire in Europe 134501804
Appendix 4, Rulers with Whome the Ottomans Come into Contact either as Enemies or as Overlords 12 82-1804
Appendix 5, Glossary of Geographical Names
Appendix 6, Glassary of Foreign Terms and Expressions
Index

GOR011231000
9780295960333
0295960337
Southeastern Europe under Ottoman Rule, 1354-1804 by Peter F. Sugar
Peter F. Sugar
A History of East Central Europe (HECE)
Used - Like New
Paperback
University of Washington Press
1983-10-01
384
N/A
Book picture is for illustrative purposes only, actual binding, cover or edition may vary.
The book has been read, but looks new. The book cover has no visible wear, and the dust jacket is included if applicable. No missing or damaged pages, no tears, possible very minimal creasing, no underlining or highlighting of text, and no writing in the margins
Trustpilot