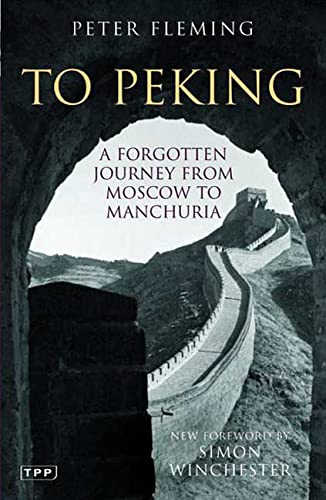 To Peking
by Peter Fleming

To Peking: A Forgotten Journey from Moscow to Manchuria by Peter Fleming

Peter Fleming, brother of "James Bond" author Ian Fleming, was one of the greatest adventurers and travel writers of the 20th century and author of several classic and bestselling books. This is the first paperback edition. It presents an exciting adventure that could never be made today - it will appeal to all interested in the region. When in 1934 at the age of twenty-seven, Peter Fleming set out for the Far East, his ultimate goal was to return from China to India overland - a journey he later described in the classic "News from Tartary". On his outward journey Fleming travelled through regions which remain some of the most remote and least-visited in Asia and which, soon after his journey, became closed entirely to westerners.From Moscow, through the Caucasus to the Caspian, on to Samarkand and Tashkent, skirting the edge of Outer Mongolia to Vladivostok and winding his way down to Peking, Fleming tells of people encountered, places explored and of ways of life that have since been lost through revolution, war and the passage of time. Along the way he kept a diary that he never intended to publish and that lay forgotten 'in the box-room' of his mind for fifteen years. "To Peking" is an unassuming classic of travel literature. Subtle yet sparkling with intelligence and humour, simple yet beautifully told, it illuminates a world that travellers - armchair or otherwise - can only dream of today.

"Peter Fleming's To Peking tells the story of a long journey, with much that is relevant for us to-day, From the Caucasus to Shanghai, via Tashkent, Irkutz and Valdivostok, Fleming sharpens his keen eye and caustic wit on bewitching places and a medley of colourful characters he encounters along the way. Written with the immediacy of a diary, this is not a journey the reader will easily forget." --John Hare, author of Mysteries of the Gobi

"With an acid and scornful mind, a fresh and vivid style... One reads him for literary delight and for the pleasure of meeting an Elizabethan spirit allied to a modern mind.... but he is also an observer of penetrating intellect." --Vita Sackville-West

"Original and impressive... As a journalist he is modernity itself; as a traveller he has about him an Elizabethan aroma, being both cruel and amused." --Harold Nicholson

..". A simple blending of modesty and wit in disarming proportions... the result is something fresh and delightful in the literature of high Asia." --New York Times

"I read the book for the pleasure of Mr. Fleming's company. Like thousands of other people I am charmed by high impudent street-urchin approach to danger and discomfort, to hunger and thirst." -- David Garnett, New Statesman

"Its entertainment value is immense. It will arouse great fury and cause much pleasure." --Harold Nicholson

"It confirmed Fleming's place in the front rank of travel writers... no modern work of travel has given me more pleasure... I have read it more times than I can remember." --Nigel Buxton

"Mr. Fleming will be remembered as a gifted writer with and easy pen given to satire... This kind of journey and this kind of book are at his fingertips." --V. S. Pritchard

..". One of the most impressive volumes that have come from Asia in many years... unadulterated reporting... brilliantly written and candidly truthful." --G. E. Sokolsky

"The best travel book I have read for a long time. It is crammed with sound observation, good writing, humour and a unique blend of disillusion, foolhardiness and high spirits.' --J.B. Priestley

"This account of the expedition has that essential double interest which is characteristic of all really great books of adventure. Mr Fleming has the most delightful sense of humour and he writes brilliantly." --David Garnett

The Siege at Peking

..".An astonishing tale... exciting, enthralling, at times humorous and always strictly accurate, this is a thoroughly enjoyable book." --Time and Tide

Peter Fleming (1907-1971) was a journalist and writer and one of the last great adventurers of the 20th century. He began his career as a special correspondent for The Times and later wrote for The Spectator throughout. He served with the Grenadier Guards during World War II and from 1942 was in charge of military deception operations in Southeast Asia, for which he was awarded an OBE. He is author of several classic books, which include Brazilian Adventure, One's Company, News from Tartary and Bayonets to Lhasa. In his memory, The Royal Geographical Society established The Peter Fleming Award for projects that seek to advance geographical science.

GOR006470258
To Peking: A Forgotten Journey from Moscow to Manchuria by Peter Fleming
Peter Fleming
Used - Very Good
Paperback
Bloomsbury Publishing PLC
2009-08-30
200
1845119967
9781845119966
N/A
Book picture is for illustrative purposes only, actual binding, cover or edition may vary.
This is a used book - there is no escaping the fact it has been read by someone else and it will show signs of wear and previous use. Overall we expect it to be in very good condition, but if you are not entirely satisfied please get in touch with us.