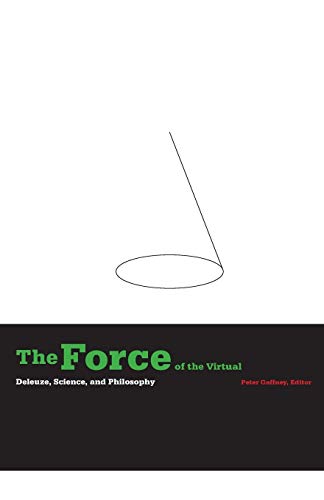 The Force of the Virtual
by Peter Gaffney

The Force of the Virtual Summary

The Force of the Virtual: Deleuze, Science, and Philosophy by Peter Gaffney

Gilles Deleuze once claimed that "modern science has not found its metaphysics, the metaphysics it needs." The Force of the Virtual responds to this need by investigating the consequences of the philosopher's interest in (and appeal to) "the exact sciences." In exploring the problematic relationship between the philosophy of Deleuze and science, the original essays gathered here examine how science functions in respect to Deleuze's concepts of time and space, how science accounts for processes of qualitative change, how science actively participates in the production of subjectivity, and how Deleuze's thinking engages neuroscience. All of the essays work through Deleuze's understanding of the virtual-a force of qualitative change that is ontologically primary to the exact, measurable relations that can be found in and among the objects of science. By adopting such a methodology, this collection generates significant new insights, especially regarding the notion of scientific laws, and compels the rethinking of such ideas as reproducibility, the unity of science, and the scientific observer. Contributors: Manola Antonioli, College International de Philosophie (Paris); Clark Bailey; Rosi Braidotti, Utrecht U; Manuel DeLanda, U of Pennsylvania; Aden Evens, Dartmouth U; Gregory Flaxman, U of North Carolina; Thomas Kelso; Andrew Murphie, U of New South Wales; Patricia Pisters, U of Amsterdam; Arkady Plotnitsky, Purdue U; Steven Shaviro, Wayne State U; Arnaud Villani, Premiere Superieure au Lycee Massena de Nice.

Customer Reviews - The Force of the Virtual

Peter Gaffney is visiting assistant professor at Haverford College and the Curtis Institute of Music, where he teaches film studies, philosophy, and literature.

Preface, Acknowledgments, Introduction: Science in the Gap, Part, I. The Virtual in Time and Space, 1. The Insistence of the Virtual in Science and the History of Philosophy, by Arnaud Villani, 2. Superposing Images: Deleuze and the Virtual after Bergson's Critique of Science, by Peter Gaffney, 3. The Intense Space(s) of Gilles Deleuze, by Thomas Kelso, Part II. Science and Process, 4. Interstitial Life: Remarks on Causality and Purpose in Biology, by Steven Shaviro, 5. Digital Ontology and Example, by Aden Evens, 6. Virtual Architecture, by Manola Antonioli, Part III. Science and Subjectivity, 7. The Subject of Chaos, by Gregory Flaxman, 8. Elemental Complexity and Relational Vitality: The Relevance of Nomadic Thought for Contemporary Science by Rosi Braidotti, 9. Numbers and Fractals: Neuroaesthetics and the Scientific Subject by Patricia Pisters, Part IV. Science and the Brain, 10. The Image of Thought and the Sciences of the Brain after What Is Philosophy?, by Arkady Plotnitsky, 11. Deleuze, Guattari, and Neuroscience, by Andrew Murphie, 12. Mammalian Mathematicians, by lark Bailey, Afterword: The Metaphysics of Science: An Interview with Manuel DeLanda Manuel DeLanda and Peter Gaffney, Contributors, Index

GOR005417360
The Force of the Virtual: Deleuze, Science, and Philosophy by Peter Gaffney
Peter Gaffney
Used - Very Good
Paperback
University of Minnesota Press
2010-06-09
416
0816665982
9780816665983
N/A
Book picture is for illustrative purposes only, actual binding, cover or edition may vary.
This is a used book - there is no escaping the fact it has been read by someone else and it will show signs of wear and previous use. Overall we expect it to be in very good condition, but if you are not entirely satisfied please get in touch with us.