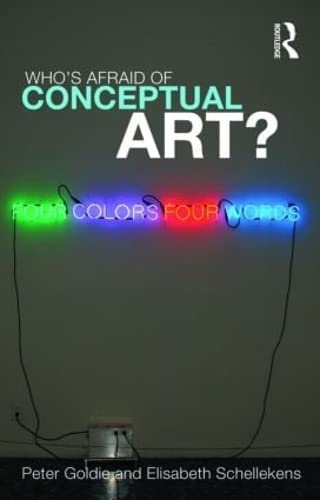 In Stock
$50,99
inc. GST
Addresses the puzzlement, frustration, irritation and resentment felt about conceptual art. This book uses conceptual art to bring to life and to reformulate some of the main issues and theories in contemporary philosophical aesthetics.
Very Good
Only 1 left

Who's Afraid of Conceptual Art? Summary

What is conceptual art? Is it really a kind of art in its own right? Is it clever - or too clever?

Of all the different art forms it is perhaps conceptual art which at once fascinates and infuriates the most. In this much-needed book Peter Goldie and Elisabeth Schellekens demystify conceptual art using the sharp tools of philosophy. They explain how conceptual art is driven by ideas rather than the manipulation of paint and physical materials; how it challenges the very basis of what we can know about art, as well as our received ideas of beauty; and why conceptual art requires us to rethink concepts fundamental to art and aesthetics, such as artistic interpretation and appreciation.

Including helpful illustrations of the work of celebrated conceptual artists from Marcel Duchamp, Joseph Kosuth and Piero Manzoni to Dan Perjovschi and Martin Creed, Who's Afraid of Conceptual Art? is a superb starting point for anyone intrigued but perplexed by conceptual art - and by art in general. It will be particularly helpful to students of philosophy, art and visual studies seeking an introduction not only to conceptual art but fundamental topics in art and aesthetics.

Who's Afraid of Conceptual Art? Reviews

'... this book is successful; thoughtful, informative, and provocative, it can be recommended to artists, art critics, art historians and other members of the artworld in addition to philosophers and aestheticians. Supplemented by material appropriate to the level, it would work well in either an introductory or an advanced course in philosophy of art.' - Philosophy in Review

'Who's Afraid of Conceptual Art? is a philosophically substantive guide through the controversies and values of conceptual art executed with wit and intellectual verve. Accessible to all, it is a must read for anyone interested in the nature and significance of conceptual art.' - Matthew Kieran, University of Leeds, UK

'Conceptual art has perplexed and provoked philosophers and art lovers for decades. Armed with perfectly chosen examples, clear and engaging arguments, and a genuine sympathy for their subject, Goldie and Schellekens explain why we are right to be perplexed and then show us how to appreciate the ingenuity and sheer craftiness of some of the most infamous and yet captivating specimens of recent art.' - Dominic McIver Lopes, University of British Columbia, Canada

'This very lively and stimulating book is the perfect cure for those who suffer from an uneasiness, or even a phobia, concerning conceptual art. Goldie and Schellekens do a wonderful job in making the philosophical issues accessible to readers lacking a specialized background. The treatment of conceptual art is well-informed, sympathetic yet critical, and liberally illustrated with engaging discussion of challenging examples.' - David Davies, McGill University, Canada

Peter Goldie is Samuel Hall Chair in Philosophy at The University of Manchester; and has held posts at King's College London and Magdalen College, Oxford. He is the author of The Emotions: A Philosophical Exploration (2000) and On Personality (2004). Elisabeth Schellekens is Senior Lecturer in the Philosophy Department at Durham University. With Peter Goldie she was a joint researcher in an AHRC Innovation Award project on philosophy and conceptual art. She is editor (with Peter Goldie) of Philosophy and Conceptual Art (2007) and author of Aesthetics and Morality (2007).

Introduction 1. The Challenge of Conceptual Art 2. The definition and the thing 3. Appreciating conceptual art 4. Aesthetics and beyond 5. What's left once aesthetic appreciation has gone?

GOR004006287
Who's Afraid of Conceptual Art? by Peter Goldie (Manchester University, UK)
Peter Goldie (Manchester University, UK)
Used - Very Good
Paperback
Taylor & Francis Ltd
2009-10-08
152
0415422825
9780415422826
N/A
Book picture is for illustrative purposes only, actual binding, cover or edition may vary.
This is a used book - there is no escaping the fact it has been read by someone else and it will show signs of wear and previous use. Overall we expect it to be in very good condition, but if you are not entirely satisfied please get in touch with us.