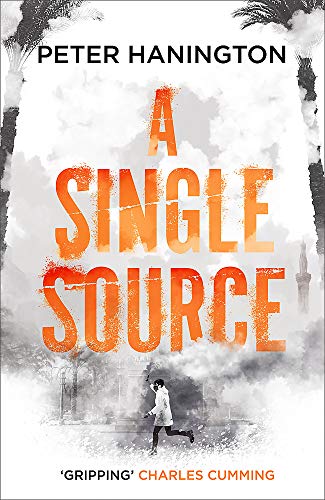 A Single Source
by Peter Hanington

Used Price
$26.99
inc. GST
Free Shipping in Australia
Veteran reporter William Carver returns in this brilliant thriller set against the backdrop of the Arab Spring, from the author of the highly-acclaimed A Dying Breed
Very Good

A GRIPPING POLITICAL THRILLER SET IN THE HEART OF THE ARAB SPRING, FROM THE AUTHOR OF A DYING BREED

Veteran BBC reporter William Carver is in Cairo, bang in the middle of the Arab Spring. 'The only story in the world' according to his editor. But it isn't. There's another story, more significant and potentially more dangerous, and if no one else is willing to tell it, then Carver will - whatever the consequences.

A Single Source tells two stories, which over a few tumultuous months come together to prove inextricably linked. There are the dramatic, world-changing events as protests spread across North Africa and the Middle East, led by a new generation of tech-savvy youngsters challenging the corrupt old order. And then there are two Eritrean brothers, desperate enough to risk everything to make their way across the continent to a better life in Europe.

The world is watching, but its attention span is increasingly short. Carver knows the story is a complex one and, in the age of Facebook, Twitter and rolling news, difficult stories are getting harder to tell. If everyone is a reporter, then who do you believe?

This hugely accomplished political thriller, brilliantly plotted . . . is written with all the dash and verve shown in Hanington's stunning debut * Irish Independent *
Topical, authoritative and gripping -- Charles Cumming
Tight, pacy and strong on atmosphere -- Michael Palin
Completely unputdownable - gripping -- Seb Emina
A compelling story set against some of the global forces shaping our times -- Mishal Husain, BBC Today presenter
Peter Hanington has a gift for fast-paced narrative, atmospheric location and authentic, often hilarious dialogue . . . people trafficking, gun smuggling, murder and betrayal are all conjured in a shifting interplay that draws you in from the first line and keeps you guessing until, literally, the very last. -- Allan Little, former BBC special correspondent
If you love le Carre, were gripped by Homeland and couldn't get your nose out of A Dying Breed, Hanington's first novel about war reporters, here's another thrilling read for you . . .The anti-hero in both novels is hard-bitten hack William Carver - a classic Lunchtime O'Booze figure - who is, miraculously, still alive. Carver fans will look forward to meeting the old curmudgeon again in Hanington's next cracking tale. -- Dame Ann Leslie
A fascinating, atmospheric read. Peter Hanington weaves a page-turning tale that is both compulsive and terrifying in equal measure. Will keep you up till the early hours. * Kate Hamer, author of THE GIRL IN THE RED COAT *
It's such a pleasure to read a novel by a writer who is the real deal. Peter Hanington is entirely in command of this thrilling story and tells it with great verve. * Kirsty Wark, author of THE LEGACY OF ELIZABETH PRINGLE *
One of the most assured pieces of writing I have read for a very long time. Peter Hanington's characters come completely alive, and you feel he knows them intimately. The sense of setting out on a journey in safe hands makes it all the more shocking when the plot takes its gut-wrenching twists. A foreign correspondent's life is, like a soldier's, made up of long periods of boredom punctuated by moments of sheer terror; my advice to Peter's BBC colleagues is 'pack this in your grab bag, and the dull hours will fly by'. It's very good indeed. * Edward Stourton *
Hanington has a knack for telling the stories of the lives behind the news headlines in a way that invites you, the reader, to care about his characters. It is an invitation I am happy to accept. It is one of his many talents as a writer. * Fi Glover, the Fortunately podcast *
A Single Source is a considered, almost deceptively suspenseful thriller with a host of well-drawn characters, including hard-bitten foreign correspondents, young idealistic Egyptian girls, creepy public relations men, a grotesque (and totally credible) arms-dealer and a wonderfully slimy Cairo hotelier. It is written by a journalist whom you feel has been there and done that - or at least some of it - with skill and humanity, and no unnecessary pyrotechnics. * Shots Mag *
A Single Source is a considered, almost deceptively suspenseful thriller with a host of well-drawn characters . . . written by a journalist whom you feel has been there and done that - or at least some of it - with skill and humanity. Ingenious and, dare I say it, rather Ambler-esque. * Mike Ripley, author of the Angel series *
An enthralling read that answers the question everyone asks of journalists: how do you get your stories? * Roy Greenslade *
Passion and politics . . . extremely well-written and an excellent read * Crime Pieces *
A highly readable conspiracy theory * Morning Star *
An intelligent spellbinding thriller * NB Books *
Convincingly told * Choice *
It's topical, authoritative and gripping, tight-paced and strong on atmosphere, full of vivid characters and so clearly mined from Hanington's own experiences as to make it feel totally authentic. The initiated may pose nods to le Carre, Greene and Ambler, but this impressive and atmospheric story, punctuated with interludes of hilarious dialogue, does entirely its own thing - and is far the stronger for it . . . There have been many books about journalism in war or near war zones. But this tale of investigative reporting, shady deals, intelligence men and conflicted diplomats is another absolutely outstanding addition from an author who spins an almost Kipling-esque story with insight, humanity, humour and, at times, near fury. * Crime Review *
A fine read * Women's Weekly (Australia) *
Convincingly atmospheric * Country and Town House *

Peter Hanington is the author of A Dying Breed and A Single Source. He has worked as a journalist for over twenty-five years, including fourteen years at the Today Programme and more recently The World Tonight and Newshour on the BBC World Service. He lives in London with his wife and has two grown-up children.