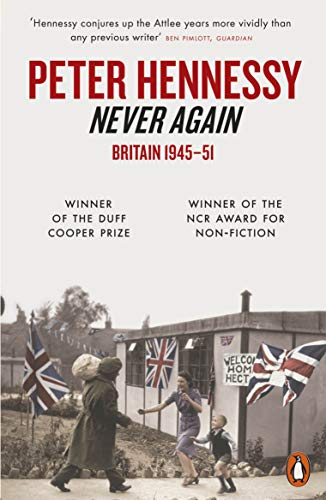 In Stock
$31.99
+10% GST
At the end of the Second World War Britain was in flux. It was an age of rationing and rebuilding; when hope for a better future contrasted with the horror of war. This title recreates the mood and feel of life in early post-war Britain.
Very Good
Only 1 left

From the high politics of Court and Cabinet room to the everyday discussions in kitchen or queue, Peter Hennessy's Never Again: Britain 1945-51 recreates the mood and feel of life in early post-war Britain.

At the end of the Second World War Britain was in flux. It was an age of rationing and rebuilding; when hope for a better future contrasted with the horror of war.

Fresh ideals emerged during the common experience of the conflict and the new, widespread belief that everyone should be treated equally led to the creation of the 'welfare state' and the NHS, despite tough economic circumstances. Internationally, Britain was finding a place in a world increasingly overshadowed by Cold War with the Soviet Union.

'A joy to read'
Sunday Times

'Jumping like a tree frog from blue book to nostalgic reminiscence to brilliant one-liner, Hennessy conjures up the Attlee years more vividly than any previous historical writer'
Ben Pimlott

'Hennessy is the antithesis of the dry-as-dust academic historian. He laughs a great deal, and punctuates his writing with cheery and illuminating anecdotes'
Ian Aitken, Guardian

'A sympathetic, highly readable, meticulously researched account of the Cabinet room politics and popular habits of life and recreation during the high noon of Labourism'
Roy Jenkins, Observer

Peter Hennessy is Attlee Professor of History at Queen Mary College, London, and the Director of the Mile End Institute of Contemporary British Government, Intelligence and Society. He is the author of Never Again: Britain 1945-51 (winner of the NCR and Duff Cooper Prizes), Having it So Good: Britain in the Fifties (winner of the Orwell Prize); the bestselling The Prime Minister and The Secret State.

Peter Hennessy was described by the late Ben Pimlott as `a political historian and journalist who has himself become something of a national institution'. He is Attlee Professor of History at Queen Mary College, London, and the author of the best-selling The Prime Minister and The Secret State (all Penguin). He is a frequent broadcaster and is regularly consulted by all political parties on constitutional and historical questions.

GOR001949157
Never Again: Britain 1945-1951 by Peter Hennessy
Peter Hennessy
Used - Very Good
Paperback
Penguin Books Ltd
2006-10-05
592
0141016027
9780141016023
N/A
Book picture is for illustrative purposes only, actual binding, cover or edition may vary.
This is a used book - there is no escaping the fact it has been read by someone else and it will show signs of wear and previous use. Overall we expect it to be in very good condition, but if you are not entirely satisfied please get in touch with us.