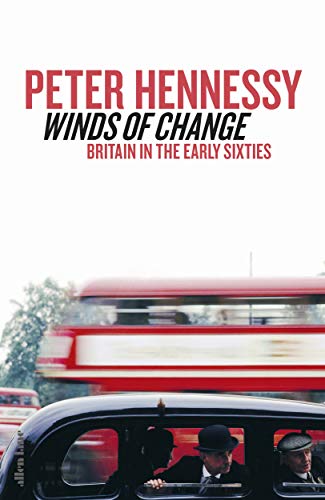 Winds of Change
by Peter Hennessy

Winds of Change: Britain in the Early Sixties by Peter Hennessy

From the celebrated author of Never Again and Having It So Good, a wonderfully vivid new history of Britain in the early 1960s

Harold Macmillan famously said in 1960 that the wind of change was blowing over Africa and the remaining British Empire. But it was blowing over Britain too - its society; its relationship with Europe; its nuclear and defence policy. And where it was not blowing hard enough - the United Kingdom's economy - great efforts were made to sweep away the cobwebs of old industrial practices and poor labour relations. Life was lived in the knowledge that it could end in a single afternoon of thermonuclear exchange if the uneasy, armed peace of the Cold War tipped into a Third World War.

In Winds of Change we see Macmillan gradually working out his 'grand design' - how to be part of both a tight transatlantic alliance and Europe, dealing with his fellow geostrategists Kennedy and de Gaulle. The centre of the book is 1963 - the year of the Profumo Crisis, the Great Train Robbery, the satire boom, de Gaulle's veto of Britain's first application to join the EEC, the fall of Macmillan and the unexpected succession to the premiership of Alec Douglas-Home. Then, in 1964, the battle of what Hennessy calls the tweedy aristocrat and the tweedy meritocrat - Harold Wilson, who would end 13 years of Conservative rule and usher in a new era.

As in his acclaimed histories of British life in the two previous decades, Never Again and Having it so Good, Peter Hennessy explains the political, economic, cultural and social aspects of a nation with inimitable wit and empathy. No historian knows the by-ways as well the highways of the archives so well, and no one conveys the flavour of the period so engagingly. The early sixties live again in these pages.

Peter Hennessy writes like he talks, which produces a delightfully wandering narrative, peppered with quirky anecdotes, that surreptitiously delivers powerful insights. This is by far the best study of early Sixties Britain; one to please the masses and wow the scholars. ... Hennessy, unique among contemporary historians, understands politics from the inside out. The book is so much fun, yet still shrewd and important -- Gerard DeGroot * The Times Books of the Year *
Professor Peter Hennessy is a fine historian of late-twentieth-century Britain. He is a master of all the published sources, and his generous personality, academic distinction and unquestioned integrity have meant that he adds to them a lifetime of the confidences and insights of most of those who have actually made our history. ... So, a standing ovation for Peter Hennessy, a good man who writes very good books. -- Chris Patten * Tablet *
Hennessy is a national treasure. He is driven by a romantic, almost sensual, fascination with British history, culture, and the quirky intricacies of British democracy and the government machine. His curiosity is insatiable, his memory infinitely capacious. -- Rodric Braithwaite * Spectator *
[G]enially narrated... what makes him such a deft public historian is the way he stitches these patches of rich local colour into a narrative with the widest possible reach. ... Hennessy has such a keen associative eye and such a generous heart for the sheer oddness of everything that the narrative spins along like a comfortable chat. -- Kathryn Hughes * Guardian *
splendid history of postwar Britain... Hennessy's writing is characterised by a wonderful mixture of wit and erudition. -- Piers Brandon * Literary Review *
a deeply-informed book that has, nearly 60 years later, powerful resonance. The foremost chronicler of the era, Hennessy combines the intricate detail with stylistic verve. -- Philip Stephens * Financial Times *
This is the third in Hennessy's wonderfully insightful series of books that make up a portrait of a nation coming to terms with victory in a ravaging war and the loss of empire. Like the others - Never Again and Having It So Good - it performs a singular balancing act between social history and cabinet-room politics. No current historian is as versed as Hennessy in the internal cogs and springs of the British state, but he also has a keen eye for the luminous face of passing time. -- Tim Adams * Observer *
a masterful survey of Britain as the decade began ... For those who know him only from the radio, Hennessy is as good a writer as he is a talker. ... I am afraid that he is now a treasure. -- David Aaronovitch * The Times *
flavoursome, but authoritative, account ... This history is none the worse - quite the opposite - for being such a personal one; but it is the intense erudition underpinning Hennessy's intimate reflections that makes it so utterly indispensable. -- Simon Heffer * Daily Telegraph *
fascinating ... dominated by the author's personal enthusiasms, researches and memories -- Max Hastings * Sunday Times *

Peter Hennessy is one of Britain's most celebrated historians, 'who has himself become something of a national institution' (Ben Pimlott). He is Attlee Professor of Contemporary British History at Queen Mary University of London. His previous books include this book's two immediate predecessors, Never Again: Britain 1945-51 (1992, winner of the Duff Cooper Prize and the NCR Prize for Non-fiction) and Having it so Good: Britain in the Fifties (2006, winner of the Orwell Prize for Political Writing). His other books include Cabinet (1986), Whitehall (1989), The Prime Minister: The Office and Its Holders Since 1945 (2000), The Secret State: Preparing for the Worst (2002, 2010) and, co-authored with James Jinks, The Silent Deep: The Royal Navy Submarine Service Since 1945 (2015, winner of the Duke of Westminster's Award for Military Literature and the Mountbatten Maritime Award). He was elected a Fellow of the British Academy in 2003 and created an independent crossbench life peer as Lord Hennessy of Nympsfield in 2010.

GOR009997665
Winds of Change: Britain in the Early Sixties by Peter Hennessy
Peter Hennessy
Used - Very Good
Hardback
Penguin Books Ltd
2019-09-05
624
1846141109
9781846141102
N/A
Book picture is for illustrative purposes only, actual binding, cover or edition may vary.
This is a used book - there is no escaping the fact it has been read by someone else and it will show signs of wear and previous use. Overall we expect it to be in very good condition, but if you are not entirely satisfied please get in touch with us.