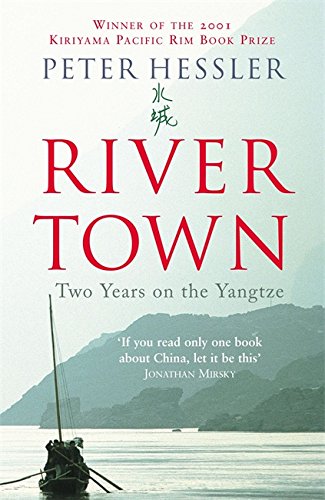 In Stock
$16.49
inc. GST
Peter Hessler tries to understand and capture the spirit of the immense, exasperating and ultimately lovable entity that is China.
Very Good Good Well Read
Only 4 left

River Town: Two Years on the Yangtze by Peter Hessler

When Peter Hessler went to China in the late 1990s, he expected to spend a couple of peaceful years teaching English in the town of Fuling on the Yangtze River. But what he experienced - the natural beauty, cultural tension, and complex process of understanding that takes place when one is thrust into a radically different society - surpassed anything he could have imagined. Hessler observes firsthand how major events such as the death of Deng Xiaoping, the return of Hong Kong to the mainland, and the controversial consturction of the Three Gorges Dam have affected even the people of a remote town like Fuling.

Poignant, thoughtful and utterly compelling, River Town is an unforgettable portrait of a place caught mid-river in time, much like China itself - a country seeking to understand both what it was and what it will one day become.

Written with great clarity and affection, River Town should be read by anyone with any interest in finding the Chinese less inscrutable * The Times *
If you read only one book about China, let it be this * Jonathan Mirsky *
Hessler's account superbly captures the spirit of a country in which he is an invader, albeit welcomed, understanding rather than merely describing it and, with consummate skill and literary style, bringing it alive in all its mesmerising complexity * Martin Booth, Sunday Times *
To come across a Westerner patient enough and tolerant enough to try to understand the immense, exasperating and ultimately lovable entity that is China is always a pleasure. To encounter one who is as literate and sensitive as Peter Hessler is a joy. This tender, intelligent account of two years spent teaching deep in the country's heart is the work of a writer of rare talent: it deserves to become a classic * Simon Winchester *
Studded with insight and humility, written with unshowy elegance, River Town is about ways of seeing * Daily Telegraph *

Peter Hessler is a graduate of Princeton and Oxford, and has written for The New Yorker, The Wall Street Journal, The New York Times, Atlantic Monthly and other publications. Raised in the United States, he now lives in Beijing.

GOR001176409
River Town: Two Years on the Yangtze by Peter Hessler
Peter Hessler
Used - Very Good
Paperback
Hodder & Stoughton General Division
2002-03-07
416
0719564808
9780719564802
Short-listed for Thomas Cook Travel Book Award 2002
Book picture is for illustrative purposes only, actual binding, cover or edition may vary.
This is a used book - there is no escaping the fact it has been read by someone else and it will show signs of wear and previous use. Overall we expect it to be in very good condition, but if you are not entirely satisfied please get in touch with us.