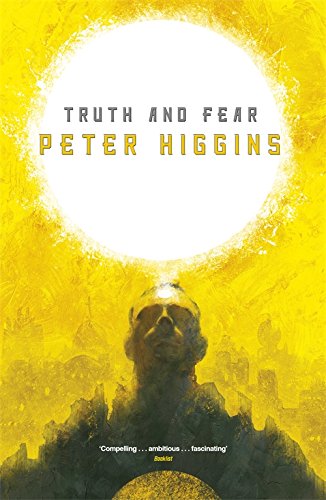 Truth and Fear
by Peter Higgins

Truth and Fear: Book Two of The Wolfhound Century by Peter Higgins

Peter Higgins' Vlast is a superbly imagined 'other' Russia, an epic land of trackless forest, sentient rain and deep powers in the Earth. Its capital Mirgorod is home both to a brutal dictatorship centuries old and fleeting glimpses of the houses and streets of another city. Compared to the works of of both China Mieville and John Le Carre WOLFHOUND CENTURY was a hugely original creation. Now Peter Higgins returns to that world.

Investigator Lom returns to Mirgorod and finds the city in the throes of a crisis. The war against the Archipelago is not going well. Enemy divisions are massing outside the city, air-raids are a daily occurrance and the citizens are being conscripted into the desperate defence of the city.

But Lom has other concerns. The police are after him, the mystery of the otherworldly Pollandore remains and the vast Angel is moving, turning all of nature against the city.

But will the horrors of war overtake all their plans?

Peter Higgins once again delivers some truely luminous prose * Tor.com *
Higgin's has increased the world building to fever pitch * Upcoming 4 Me *
This picks up from WOLFHOUND CENTURY, seamlessly capturing the atmosphere and excitement that made Higgins first novel in the series so enjoyable * Fantasy Book Review *

Peter Higgins read English at Oxford University and Queen's, Ontario. He was a Junior Research Fellow at Wolfson College, Oxford and worked in the British Civil Service. His short stories have appeared in FANTASY: BEST OF THE YEAR 2007, BEST NEW FANTASY 2, ASIMOV'S SCIENCE FICTION, FANTASY MAGAZINE, ZAHIR and REVELATION, and in Russian translation in the St Petersburg magazine ESLI. His first novel was the acclaimed WOLFHOUND CENTURY. He lives with his family in South Wales.

GOR010707526
Truth and Fear: Book Two of The Wolfhound Century by Peter Higgins
Peter Higgins
The Wolfhound Century Trilogy
Used - Like New
Paperback
Orion Publishing Co
2015-04-09
384
0575130601
9780575130609
N/A
Book picture is for illustrative purposes only, actual binding, cover or edition may vary.
The book has been read, but looks new. The book cover has no visible wear, and the dust jacket is included if applicable. No missing or damaged pages, no tears, possible very minimal creasing, no underlining or highlighting of text, and no writing in the margins.