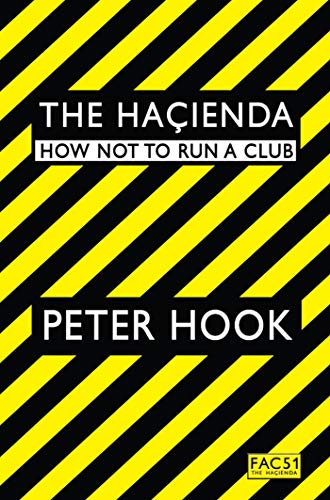 The Hacienda
by Peter Hook

The Hacienda: How Not to Run a Club by Peter Hook

Peter Hook, as co-founder of Joy Division and New Order, has been shaping the course of popular music for thirty years. He provided the propulsive bass guitar melodies of 'Love Will Tear Us Apart' and the bestselling 12-inch single ever, 'Blue Monday' among many other songs. As co-owner of Manchester's Hacienda club, Hook propelled the rise of acid house in the late 1980s, then suffered through its violent fall in the 1990s as gangs, drugs, greed and a hostile police force destroyed everything he and his friends had created. This is his memory of that era and 'it's far sadder, funnier, scarier and stranger' than anyone has imagined.

As young and naive musicians, the members of New Order were thrilled when their record label Factory opened a club. Yet as their career escalated, they toured the world and had top ten hits, their royalties were being ploughed into the Hacienda and they were only being paid GBP20 per week. Peter Hook looked back at that exciting and hilarious time to write HACIENDA. All the main characters appear - Tony Wilson, Barney, Shaun Ryder - and Hook tells it like it was - a rollercoaster of success, money, confusion and true faith.

Peter Hook was born in 1956 in Salford. He was a founding member of Joy Division and New Order and DJs internationally as well as touring Joy Division's music with his new band The Light. He lives in Cheshire.

GOR002447850
The Hacienda: How Not to Run a Club by Peter Hook
Peter Hook
Used - Very Good
Paperback
Simon & Schuster Ltd
2010-09-30
368
184739177X
9781847391773
N/A
Book picture is for illustrative purposes only, actual binding, cover or edition may vary.
This is a used book - there is no escaping the fact it has been read by someone else and it will show signs of wear and previous use. Overall we expect it to be in very good condition, but if you are not entirely satisfied please get in touch with us.