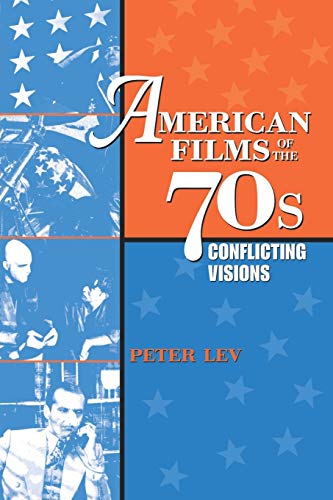 American Films of the 70s
by Peter Lev

Out of Stock
$36.99
inc. GST
The films of the 1970s constitute a kind of conversation about what American society is and should be - open, diverse, and egalitarian, or stubbornly resistant to change.
Like New
Only 0 left

American Films of the 70s Summary

American Films of the 70s: Conflicting Visions by Peter Lev

While the anti-establishment rebels of 1969's Easy Rider were morphing into the nostalgic yuppies of 1983's The Big Chill, Seventies movies brought us everything from killer sharks, blaxploitation, and disco musicals to a loving look at General George S. Patton. Indeed, as Peter Lev persuasively argues in this book, the films of the 1970s constitute a kind of conversation about what American society is and should be-open, diverse, and egalitarian, or stubbornly resistant to change.

As accessible to ordinary moviegoers as to film scholars, Lev's book is an essential companion to these familiar, well-loved movies.

American Films of the 70s Reviews

"The 1970s have been largely neglected in film scholarship. Lev's book is just what the field needs... [Indeed], the entire field of cinema studies needs to see more publications of the quality of this one-conscientious, thorough, well-balanced, and insightful... It's the kind of book that will become increasingly important in the next century." Paul Monaco, author of Society, Culture, and Television

Peter Lev is Professor of Electronic Media and Film at Towson University.

GOR010392018
American Films of the 70s: Conflicting Visions by Peter Lev
Peter Lev
Used - Like New
Paperback
University of Texas Press
1999-11-30
260
0292747160
9780292747166
N/A
Book picture is for illustrative purposes only, actual binding, cover or edition may vary.
The book has been read, but looks new. The book cover has no visible wear, and the dust jacket is included if applicable. No missing or damaged pages, no tears, possible very minimal creasing, no underlining or highlighting of text, and no writing in the margins.