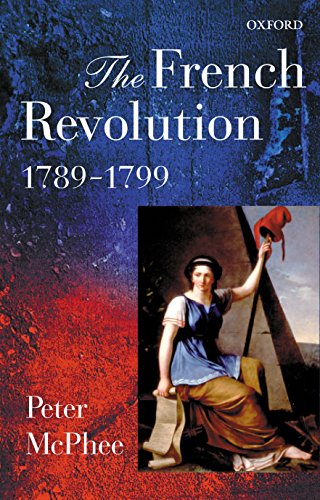 The French Revolution, 1789-1799
by Peter McPhee (Professor of History, University of Melbourne)

The French Revolution, 1789-1799 by Peter McPhee (Professor of History, University of Melbourne)

Overall, I think [this book] is one of the best short histories of the Revolution to appear in many years. He is particularly successful in integrating specific case examples and quotations from the period into his general narrative and historiographic analysis and in thus conveying the drama and passion of the Revolution, so often passed over in texts of this kind. It also provides an excellent corrective to many recent "revisionist" texts, reasserting the importance of social dynamics before and during the Revolution and eshewing simplistic explanations of the Terror based solely on ideology or internal politics. Finally, I am impressed by his effective integration of a great deal of new scholarship published during the last decade, notably in his treatment of rural history and the experience of women during the Revolution. In sum, I would strongly recommend the book, and I look forward to trying it out in my own courses. * Timothy Tackett, University of California *
Peter McPhee's history of the French Revolution is a real tour de force. More successfully than any other general history of the period, it combines an admirably clear narrative of this complex decade with an intelligent survey and analysis of other historians' perspectives. Beside them, McPhee sets out his own understandings of the Revolution sensibly and undogmatically so that readers can judge their merits. Beyond these strengths, the book is enriched by illuminating discussions of the effects of the Revolution on everyday lives of women and men and by a refreshing attention to rural France - the home of the great majority of French people at the time. Written in a lively and engaging way, this book cannot but draw readers more deeply into one of the most fascinating periods in world history. * Roderick Phillips, Carleton University *
With an easy style and a clear purpose, Professor Peter McPhee pilots students past key questions of the origin and course, meaning and significance of the French Revolution. Touching most debates in the historiography, McPhee's history still offers a sound narrative of revolutionary events, egos and enactments, always in chapters of manageable length, always with an eye to evidence that's first-hand, fascinating and fresh. Scores of students and teachers will owe him a debt of thanks. * Adrian Jones, La Trobe University *

About Peter McPhee (Professor of History, University of Melbourne)

Peter McPhee was educated at the Universtity of Melbourne. He taught at La Trobe University (Melbourne) and the Victoria University of Wellington (New Zealand) before returning to the University of Melbourne, where he has held a Personal Chair in History since 1993. He has published widely on the history of modern France, notably, 'A Social History of France 1780-1880' (London, 1992) and Revolution and Environment in Southern France, 1780-1830' (Oxford, 1999).

GOR002525218
The French Revolution, 1789-1799 by Peter McPhee (Professor of History, University of Melbourne)
Peter McPhee (Professor of History, University of Melbourne)
Used - Very Good
Paperback
Oxford University Press
2001-12-06
240
0199244146
9780199244140
N/A
Book picture is for illustrative purposes only, actual binding, cover or edition may vary.
This is a used book - there is no escaping the fact it has been read by someone else and it will show signs of wear and previous use. Overall we expect it to be in very good condition, but if you are not entirely satisfied please get in touch with us.