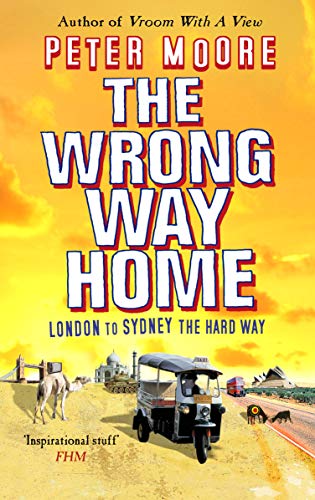 When Peter Moore announced he was going to travel from London to his home in Sydney without boarding an aeroplane he was met with a resounding Why? The answer was perversity and a severe case of hippie envy - hippies had the best music, they had the best drugs, they had the best sex. But most of all, they had the best trips. Over the eight months (and twenty-five countries) that followed, Moore retraced the steps of many who had made the overland journey from London to the East circa 1967 with the knowledge that his funds were painfully inadequate and the chances of actually making it through places like the Balkans, Iran and China were, in a word, slim. THE WRONG WAY HOME is the hilarious account of this life-enhancing Grand Tour by means of bone-rattling bus rides, furnace-like trains and exorbitantly-priced taxis. Along the way, Moore took in the world's most expensive disco in Albania; the bombed out villages and military checkpoints of Croatia; the opium fields of Laos; student riots in Jakarta, and an all-night beach rave on a small island in southern Thailand. He describes the places - and the people he encountered there - with a mixture of awe, irreverence and self-deprecation. Striking a chord with all those travellers, young and old, who have stood where Moore stood, THE WRONG WAY HOME entertains and alarms those of us who love to read about off-the-beaten-track travel adventures but would never be fool enough to pack our rucksacks and go.

"'Moore has the parched dry wit, the solid brass cojones of a true traveller and rare eye for the madness of the wider world' John Birmingham"
"'Peter Moore is the genuine article, a traveller's traveller' FHM"
"'Peter Moore is the Jim Carrey of Australian travel writing' Sydney Morning Herald"
"'A refreshingly cynical blast of fresh air' Melbourne Age"

Peter Moore is an itinerant hobo who is lucky enough to be able to support his insatiable travel habit (he has visited 92 countries on his travels) through writing. He is the author of four acclaimed travel books - The Wrong Way Home, The Full Montezuma, Swahili for the Broken-Hearted (shortlisted for the WHSMith People's Choice Travel Book Award) and Vroom with a View as well as the classic alternative travel guide, No Shitting in the Toilet. When he's not on the road living out of his senselessly overweight backpack, he alternates between London and Sydney with his collection of souvenir plastic snowdomes and Kinder Surprise toys.

GOR001300794
The Wrong Way Home by Peter Moore
Peter Moore
Used - Very Good
Paperback
Transworld Publishers Ltd
2005-04-22
400
0553817000
9780553817003
N/A
Book picture is for illustrative purposes only, actual binding, cover or edition may vary.
This is a used book - there is no escaping the fact it has been read by someone else and it will show signs of wear and previous use. Overall we expect it to be in very good condition, but if you are not entirely satisfied please get in touch with us.