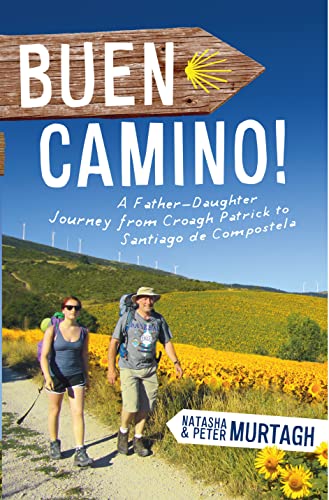 A Father-Daughter Journey from Croagh Patrick to Santiago de Compostela

This is the story of an Irish father and his 18-year-old daughter and their 900-kilometre walk together across northern Spain along the ancient pilgrim route to the tomb of St James.

Peter and Natasha's journey starts in drizzle and wind as they scale Croagh Patrick, Ireland's Holy Mountain in Mayo, before setting off immediately afterwards for the Pyrenees in France. There, they start walking the Camino, the Way of St James, to Santiago de Compostela. It is a gruelling trek over three mountain ranges; through fields and valleys, villages, towns and cities, to the lush countryside and forests of Galicia, and eventually to Finisterre, the pagan end of the earth.

Along the way, they meet a motley collection of other pilgrims - men and women, young and old, from many countries - with whom they laugh, cry and above all have fun amid moments of high drama, exhilaration and sometimes exhaustion.

They run with the bulls and parade in a fiesta; they pray with the faithful, and explore the Camino's rich Christian and pagan history, its tiny churches and majestic cathedrals; they stay in its sometimes Spartan pilgrim hostels and appreciate the richness of living simply, with few possessions, on about EURO20 each a day. And after five weeks' walking, do they still love each other? Absolutely... and would do it all again tomorrow if they could...

"A lovely book for those who have done the Camino, or like me, are thinking of doing it." The Dubliner

"This is a travel book, certainly, but it is much much, more than that. It's about family and friendship and camaraderie, and it is, in the end, a wonderfully warm story about the bond between a loving adventurous father and his daughter ready to embrace the world." - The Irish Mail on Sunday

Natasha Murtagh is a first-year student of English and Philosophy at University College Dublin. She lives at home in Greystones, Co. Wicklow, with her parents and brother, three dogs and two cats. Peter Murtagh is a managing editor at The Irish Times. He is co-author (with Joe Joyce) of two books, The Boss, Charles J Haughey in government (1983) and Blind Justice, the Sallins mail train robbery (1984). He is author of The Rape of Greece - the king, the colonels and the resistance (1994) and has edited 11 editions of The Irish Times Book of the Year. He received the Award for Outstanding Work in Irish Journalism in 1984 and was Reporter of the Year in Britain in 1986 while working for The Guardian. He is 58 years old and also lives at home with his wife Moira, son Patrick and Natasha, and the same three dogs and two cats.