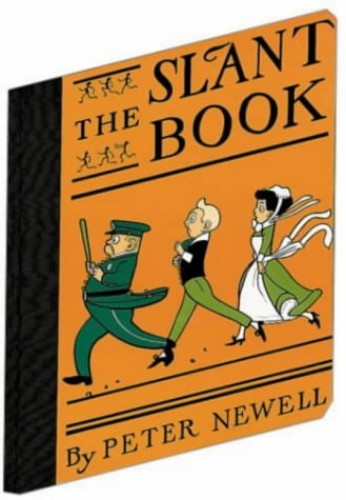 The Slant Book
by Peter Newell

Used Price
inc. GST
Free Shipping in Australia
Where Bobby lives there is a hill, a hill so steep and high, "'twould fill the bill for Jack and Jill, their famous act to try...". A cart, a newsboy, and the force of gravity make for a most excellent adventure in a busy American town.
Very Good

The Slant Book by Peter Newell

"Where Bobby lives there is a hill--
A hill so steep and high,
'Twould fill the bill for Jack and Jill
Their famous act to try

Once Bobby's go-cart broke away
And down this hill it kited.
The careless Nurse screamed in dismay
But Bobby was delighted..."

Long before Richard Scarry or Dr. Seuss, an American artist delighted a generation of children and their parents with hilarious, topsy-turvy illustrations and slightly subversive tales told in rhyme. This was illustrator/author Peter Newell.

Originally published in 1910, The Slant Book remains as profoundly enjoyable and incredibly popular as ever. The humorous text and funny illustrations are also slanted to create an adventurous tale. This classic work will delight readers of all ages as they follow a go-cart, a newsboy and a careening baby carriage down a hill.

Peter Newell (1862-1924) began his career as an artist drawing portraits, using crayons as his medium. In his fantastic humor, many believe, is the first appearance of the gentle humor of the absurd which The New Yorker has subsequently developed to such a high level.

Peter Newell (1862 -1924) began his career painting portraits, using crayons as a medium, before turning to children's book. Besides his own books, Newell illustrated Mark Twain's Innocents Abroad and Lewis Carroll's Alice in Wonderland and Through the Looking Glass. He is the author of the Tuttle Classics The Hole Book, The Slant Book, and The Rocket Book.

CIN000131075
The Slant Book by Peter Newell
Peter Newell
Used - Very Good
Hardback
Tuttle Publishing
1998-04-03
49
0804805326
9780804805322
N/A
Book picture is for illustrative purposes only, actual binding, cover or edition may vary.
This is a used book - there is no escaping the fact it has been read by someone else and it will show signs of wear and previous use. Overall we expect it to be in very good condition, but if you are not entirely satisfied please get in touch with us.