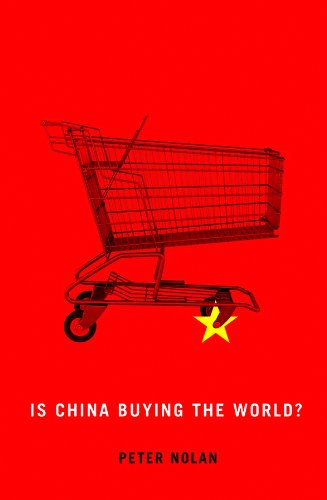 Is China Buying the World?
by Peter Nolan

Is China Buying the World? Summary

Is China Buying the World? by Peter Nolan

China has become the world's second biggest economy and its largest exporter. It possesses the world's largest foreign exchange reserves and has 29 companies in the FT 500 list of the world's largest companies. `China's Rise' preoccupies the global media, which regularly carry articles suggesting that it is using its financial resources to `buy the world'.

Is there any truth to this idea? Or is this just scaremongering by Western commentators who have little interest in a balanced presentation of China's role in the global political economy?

In this short book Peter Nolan - one of the leading international experts on China and the global economy - probes behind the media rhetoric and shows that the idea that China is buying the world is a myth. Since the 1970s the global business revolution has resulted in an unprecedented degree of industrial concentration. Giant firms from high income countries with leading technologies and brands have greatly increased their investments in developing countries, with China at the forefront. Multinational companies account for over two-thirds of China's high technology output and over ninety percent of its high technology exports. Global firms are deep inside the Chinese business system and are pressing China hard to be permitted to increase their presence without restraints.

By contrast, Chinese firms have a negligible presence in the high-income countries - in other words, we are `inside them' but they are not yet `inside us'. China's 70-odd `national champion' firms are protected by the government through state ownership and other support measures. They are in industries such as banking, metals, mining, oil, power, construction, transport, and telecommunications, which tend to make use of high technology products rather than produce these products themselves. Their growth has been based on the rapidly growing home market. China has been unsuccessful so far in its efforts to nurture a group of globally competitive firms with leading global technologies and brands. Whether it will be successful in the future is an open question.

This balanced analysis replaces rhetoric with evidence and argument. It provides a much-needed perspective on current debates about China's growing power and it will contribute to a constructive dialogue between China and the West.

Is China Buying the World? Reviews

"China frightens the west. Rarely, however, do westerners look at how the world looks to China. Among the few westerners able to look at the world from the Chinese point of view is Peter Nolan... In [this] thought-provoking book... he addresse[s] one of the big fears about China that it is buying the world. His answer is no: we are inside China but China is not inside us." Martin Wolf, Financial Times "Peter Nolan knows more about Chinese companies and their international competition than anyone else on earth, including in China." Financial Times "This new book joins the debate with breath-taking depth and width, probing the very heart of the global economic system that we currently live in." LSE Politics Blog "A balanced and very honest analysis." Global Journal "Another excellent product of Nolan's fruitful academic career. In spite of its brevity, this highly readable yet rigorous volume closely engages many essential issues that directly concern the future of the world's economic and political orders." China Perspectives "This is a useful little book; not only for its assessment of China, but also for its resume of the globalised West and indeed worth a look for that alone." Liberator "A well-argued rebuttal of anti-Chinese xenophobia, full of remarkable statistics." The Age "A slim and agile study of the eponymous question, which primarily seeks to debunk the growing myth." International Affairs "This is an analysis which replaces rhetoric on Chinese companies with evidence" Business Week "Nolan makes a convincing case against panic. Even China's vast sovereign wealth is small compared to the market capitalisation of the companies listed on the stock exchanges of the West." The CA Magazine "Nolan's slim factual volume is a model of clarity." Morning Star "An important perspective that challenges popular conceptions." Publisher's Weekly "If you want to learn about large companies, their role in the global economy and in China's rise, there is no better guide than Peter Nolan: his analyses are factual, measured and persuasive." Vaclav Smil, University of Manitoba "There is a wealth of current information in the book. The prose is succinct. It is aimed at addressing the question of China buying the world in the most direct, fact based way."(Studies on Asia 2013)

Peter Nolan is Professor of Chinese Management at the University of Cambridge and Director of the Chinese Big Business Programme at the Judge Business School. He has been centrally involved in discussions about the integration of China with the global economy and business system. He has testified before the US Congress' US-China Economic and Security Review Commission and served as an Advisor to the World Bank.

2.2 Evidence from automobiles and beverages 25

2.3 Globalization and 'going out' by global firms 38

3.5 Multinational companies 'going in' to China 84

3.6 Chinese fi rms 'going out' of China into the high-income economies: 'I have you within me but you do not have me within you' 95

4 The Complexity of 'Us' and 'Them': The Case of Strategic Industries 110

Is China buying the world? 132

The complexity of catching up 142

GOR007208351
Is China Buying the World? by Peter Nolan
Peter Nolan
Used - Very Good
Hardback
Polity Press
2012-05-18
120
0745660789
9780745660783
N/A
Book picture is for illustrative purposes only, actual binding, cover or edition may vary.
This is a used book - there is no escaping the fact it has been read by someone else and it will show signs of wear and previous use. Overall we expect it to be in very good condition, but if you are not entirely satisfied please get in touch with us.