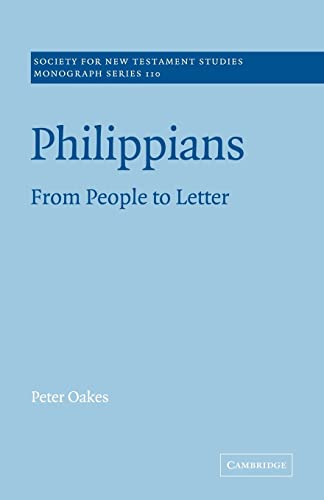 Out of Stock
$63.99
inc. GST
A comprehensive explanation of Philippians as a letter written to call the Christians to unity under economic suffering. The book uses archaeology and other methods to build a detailed picture of the types of people likely to have been in Philippi and in the Christian community there.
Like New
Only 0 left

Philippians: From People to Letter by Peter Oakes (University of Manchester)

A case-study in modelling the social make-up of an early Christian community, including estimated figures for the various social groups in the model. A case-study in how such modelling can make an impact on the exegesis of a text. The result is a proposal for reading Philippians as a call for unity under economic suffering. In particular, the story of Christ in Philippians 2.6-11 is read as a reinforcement of this call in the specifically Roman context of Philippi. The book begins with a discussion of archaeological and literary evidence about the development of the Roman colony of Philippi. It also includes discussion of the likely effects of suffering among various social groups in the church, exploration of Paul's and Christ's roles as models for the Philippians, and comparison of Paul's language about Christ with Imperial ideology.

"This book represents a considerable advance over current studies on Philippi, increasing our understanding of the city, its church, and the importance of Paul's letter to them...In this study Oakes brings new sophistication to the context of Paul's letters to the Philippians...Thus his project is ground-breaking and a welcome addition to the scholarship on Philippians. This study is also a significant advance over previous attempts by Biblical scholars to study the Greco-Roman context of early Christianity by using sociological models...Okeas, I believe, rightly focuses on concrete life situations rather than doctrinal issues when exploring the theme of suffering in Philippians, and he spells out in detail the economic implications of conversion...I must reiterate the importance of this work in offering a detailed and thoughtout model of Philippi and the Philippian Christian community." BMCR 2001 12.02
"Deserves attention from Pauline scholars and students." Religious Studies Review
"Should be consulted by all who desire an authoritative account of what it must have been like to be a Christian in first-century Philippi." Journal of Religion
"The interpretation of the political connotations of the language is convincing." The Catholic Biblical Quarterly

GOR010438390
Philippians: From People to Letter by Peter Oakes (University of Manchester)
Peter Oakes (University of Manchester)
Society for New Testament Studies Monograph Series
Used - Like New
Paperback
Cambridge University Press
2007-04-30
248
0521036615
9780521036610
N/A
Book picture is for illustrative purposes only, actual binding, cover or edition may vary.
The book has been read, but looks new. The book cover has no visible wear, and the dust jacket is included if applicable. No missing or damaged pages, no tears, possible very minimal creasing, no underlining or highlighting of text, and no writing in the margins.