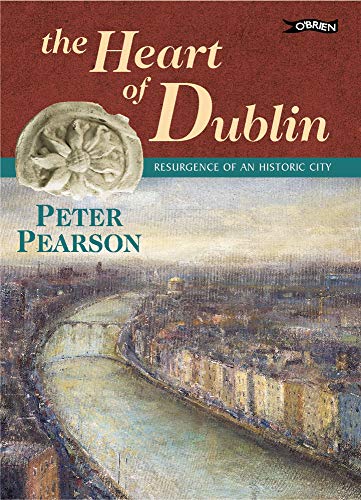 The Heart of Dublin by Peter Pearson

A fascinating book from an acknowledged expert. Traces the history of Dublin, street by street, through its most historic areas. Includes many new and previously unpublished photographs and maps.

The Heart of Dublin: Resurgence of an Historic City by Peter Pearson

From the author of Between the Mountains and the Sea comes a book charting the history of the centre of the city of Dublin. It traces the history of the ancient heart of Dublin, street by street, area by area -- its Viking origins, its growth as a medieval walled city, its metamorphosis in the eighteenth century into an elegant Georgian capital. It charts the gradual creeping dereliction during the twentieth century and its resurgence during the past twenty years as a new-found prosperity and pride has led to new developments and a restoration of much of the city's architectural heritage.

Ireland's capital city has many different faces -- the city's outdoor markets, Moore Street to Temple Bar to Thomas Street; the Custom House Docks development of shiny, glazed office blocks; Smithfield with its chimney converted to a viewing tower and its striking row of giant steel masts; Temple Bar, now a cultural and artistic centre crammed with restaurants and pubs, galleries and street markets; Grafton Street, Dublin's fashionable shopping street for the last two hundred years; Dublin's many excellent museums and theatres; great architecture creating a bridge from the Dublin of today with the living history of the past.

The last twenty years have seen a mood of change, and a new pride in Dublin, emerge. The opening up of new pedestrian routes to districts like Temple Bar and Smithfield and the building of a new pedestrian bridge over the Liffey have helped to restore a people-friendly feeling to the city. Dublin has changed within the space of ten or twelve years into a vibrant, active, multicultural city, with many new buildings.

'There have been many excellent books published on Dublin, but I feel that this one surpasses them all. Not least among its attractions is the multitude of illustrations with which it is backed ... For any person with an interest in Dublin this book will provide answers to virtually any queries that may arise ... Even readers with a good knowledge of the city will be surprised at how much additional information on each area they can glean from it ... I can confidently recommend this book to anyone with an interest in, and a love for Dublin.' -- Dublin Historical Record * Dublin Historical Record *
'When a historian, conservationist and artist with a life-long commitment to the recording and protection of a city's architectural heritage works with a publisher with a passion for doing things properly something pretty good is guaranteed. Here we have a very fine book, fully equal to the vastness and complexity of the subject.' -- Ireland of the Welcomes
Peter Pearson is an historian, conservationist and noted artist with a lifelong commitment to the protection and enhancement of Ireland's architectural heritage. He has attended demolitions of many great houses, rescuing their decorative period features, in the process amassing a vast body of knowledge on the crafts, social and economic history of places throughout Ireland. He has written and contributed to many books and publications. He initiated the Drimnagh Castle Restoration Project and has worked with An Taisce and the Irish Georgian Society and is a founder member of the Dublin Civic Trust, a member of the Heritage Council and an honorary life member of the Dun Laoghaire Historical Society. Born in 1955, Peter was educated at Kingstown School and Trinity College Dublin. Peter now lives with his wife and two sons in County Wexford. He has written the bestselling Between the Mountains and the Sea, Dun Laoghaire-Rathdown County, which details the architectural heritage of the county, and The Heart of Dublin, published in 2000, which charts the origins and planning of Dublin's streetscapes from early times to the present day. His latest book, Decorative Dublin is a beautifully illustrated account of the many decorative elements to be found on Dublin's streets and in its buildings.
GOR001129653
9780862786687
0862786681
The Heart of Dublin: Resurgence of an Historic City by Peter Pearson
Peter Pearson
Used - Very Good
Hardback
O'Brien Press Ltd
2000-09-18
480
N/A
Book picture is for illustrative purposes only, actual binding, cover or edition may vary.
This is a used book - there is no escaping the fact it has been read by someone else and it will show signs of wear and previous use. Overall we expect it to be in very good condition, but if you are not entirely satisfied please get in touch with us
Trustpilot