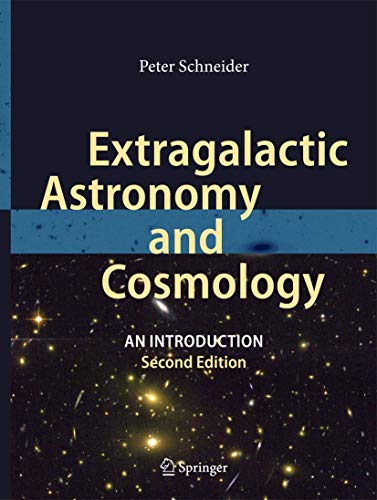 In Stock
$147.99
inc. GST
The basics of classical astronomy and stellar astrophysics needed for extragalactic astronomy are provided in the appendix.

While this book has grown out of introductory university courses on astronomy and astrophysics and includes a set of problems and solutions, it will not only benefit undergraduate students and lecturers;

Extragalactic Astronomy and Cosmology: An Introduction by Peter Schneider

This second edition has been updated and substantially expanded. Starting with the description of our home galaxy, the Milky Way, this cogently written textbook introduces the reader to the astronomy of galaxies, their structure, active galactic nuclei, evolution and large scale distribution in the Universe. After an extensive and thorough introduction to modern observational and theoretical cosmology, the focus turns to the formation of structures and astronomical objects in the early Universe. The basics of classical astronomy and stellar astrophysics needed for extragalactic astronomy are provided in the appendix.

While this book has grown out of introductory university courses on astronomy and astrophysics and includes a set of problems and solutions, it will not only benefit undergraduate students and lecturers; thanks to the comprehensive coverage of the field, even graduate students and researchers specializing in related fields will appreciate it as a valuable reference work.

"Extragalactic Astronomy and Cosmology is a textbook about what and how we know or hypothesise about the Universe and our Galaxy. The book starts out with a short overview of all the strange and wonderful astronomical objects and cosmological ideas that we face in modern science. I enjoyed most the depth and abundance of details provided in the book." (AstroMadness.com, May, 2017)

"An obvious difference from many other roughly similar books is the large number of illustrations, many in colour. ... I recommend the book both to students and to those who work in fields other than those covered by the book ... . It is up to date, quite detailed for an introduction, and the numerous figures with references are particularly useful as jumping-off points to the original literature." (Phillip Helbig, The Observatory, April, 2016)

Peter Schneider is a Full Professor for Astrophysics at the University of Bonn and Founding Director of the Argelander-Institut fur Astronomie, Bonn. He is one of the internationally most respected German astrophysicists, well known for his research on gravitational lensing (strong and weak) and cosmology, and author of 3 successful Springer books.

Introduction and overview.- The Milky Way as a galaxy.- The World of Galaxies.- Cosmology I: Homogeneous isotropic world models.- Active galactic nuclei.- Clusters and groups of galaxies.- Cosmology II: Inhomogeneities in the Universe.- Cosmology III: The cosmological parameters.- The Universe at high redshift.- Galaxy evolution.- Outlook.- A: The electromagnetic radiation field.- B: Properties of stars.- C: Units and constants.- D: Recommended literature.- Index.

GOR010615791
Extragalactic Astronomy and Cosmology: An Introduction by Peter Schneider
Peter Schneider
Used - Like New
Hardback
Springer-Verlag Berlin and Heidelberg GmbH & Co. KG
2014-10-09
626
3642540821
9783642540820
N/A
Book picture is for illustrative purposes only, actual binding, cover or edition may vary.
The book has been read, but looks new. The book cover has no visible wear, and the dust jacket is included if applicable. No missing or damaged pages, no tears, possible very minimal creasing, no underlining or highlighting of text, and no writing in the margins.