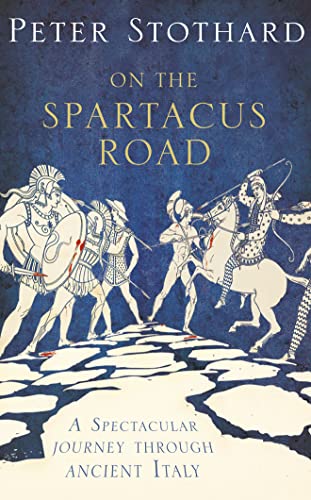 On the Spartacus Road
by Peter Stothard

In this inspiring and original book, former editor of The Times, Sir Peter Stothard, re-traces the journey taken by Spartacus and his army of rebels.

On the Spartacus Road Summary

On the Spartacus Road: A Spectacular Journey through Ancient Italy by Peter Stothard

In this inspiring and original book, former editor of The Times, Sir Peter Stothard, re-traces the journey taken by Spartacus and his army of rebels.

In the final century of the first Roman Republic an army of slaves brought a peculiar terror to the people of Italy. Its leaders were gladiators. Its purpose was incomprehensible. Its success was something no one before had ever known.

The Spartacus Road is the route along which this rebel army outfought the Roman legions between 73 and 71BC, bringing both fears and hopes that have never wholly left the modern mind. It is a road that stretches through 2,000 miles of Italian countryside and out into 2,000 years of world history.

In this inspiring and original memoir, the former editor of The Times, Peter Stothard, takes us on an extraordinary journey. The result is a book like none other - at once a journalist's notebook, a classicist's celebration, a survivor's record of a near fatal cancer and the history of a unique and brutal war.

As he travels along the Spartacus road - through the ruins of Capua to Vesuvius and the lost Greek cities of the Italian south - Stothard's prose illuminates conflicting memories of times ancient and modern, the simultaneously foreign and familiar, one of the greatest stories of all ages. Sweepingly erudite and strikingly personal, "On the Spartacus Road" is non-fiction writing of the highest order.

Customer Reviews - On the Spartacus Road

On the Spartacus Road Reviews

`A journey to be relished...For this is the story of a pursuit, and of a pilgrimage...Stothard brings to bear a lifetime of classical study, a scholar's nose for the keenest truffles amongst the footnotes and implications of the bagful of well-thumbed texts he has packed for the road, as well as an instinct for salient gossip and an easy manner with strangers....He is relaxed, amused, observant, and refreshingly unstuffy....weaving his tale through the dreamy underworld of ancient poems and letters, portraying a land as vicious and prejudiced and redemptive, as strange and familiar as our own.' Tom Adair, Scotsman

`Stothard expertly shapes a narrative in which Blair manages to stick by his principles...' Publishers Weekly

`A remarkable encapsulation of history' Kirkus

Peter Stothard was editor of The Times from 1992 to 2002, the period of its greatest commercial success for a century, and is currently editor of the Times Literary Supplement. He was knighted for his services to newspapers in 2003. He has written extensively on politics and literature.

GOR001749294
On the Spartacus Road: A Spectacular Journey through Ancient Italy by Peter Stothard
Peter Stothard
Used - Very Good
Hardback
HarperCollins Publishers
2010-01-21
368
0007340788
9780007340781
N/A
Book picture is for illustrative purposes only, actual binding, cover or edition may vary.
This is a used book - there is no escaping the fact it has been read by someone else and it will show signs of wear and previous use. Overall we expect it to be in very good condition, but if you are not entirely satisfied please get in touch with us.