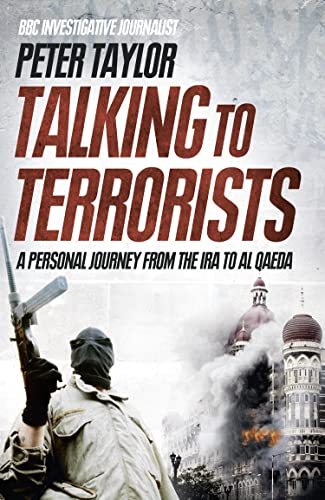 Talking to Terrorists
by Peter Taylor

Talking to Terrorists: A Personal Journey from the IRA to Al Qaeda by Peter Taylor

In 'Talking to Terrorists' Peter Taylor takes us on a personal journey, quoting from diaries written at the time, as he reveals what it was like to come face-to-face with killers such as the Brighton bomber, Patrick Magee, and Islamic jihadis.

What are terrorists really like? How do states counter them? And should governments talk to them? Drawing on more than 35 years of reporting terrorism, Taylor asks these questions as he tries to understand the motives of the men and women behind some of the world's most notorious terror attacks.

The reality behind terrorism is complex. As the saying goes, 'one man's terrorist is another man's freedom fighter'. Many former 'terrorists' have gone on to become statesmen: Menachem Begin of Israel's Irgun, Yasser Arafat of Palestine's Fatah, Nelson Mandela of South Africa's ANC, and Gerry Adams and Martin McGuinness of Ireland's Irish Republican Army. Stripped of their masks, bombs and guns, terrorists are normal people - but they are prepared to kill in the name of a cause in which they believe.

Taylor asks what lessons can be learned from the resolution of conflict in Northern Ireland in confronting the threat of Islamic extremism, and tackles head-on the highly topical issue of extracting actionable intelligence that could save lives. When does interrogation become torture? Often, he argues, there is little choice but to talk to the enemy.

Reviews for `Brits: The War against the IRA':

'As one has come to expect from Taylor, the research is meticulous, accurate and balanced' Irish Times

'Helps us understand the moment of truth we have now reached in the peace process ... could not be more topical' Irish Independent

Peter Taylor is a highly respected BBC investigative journalist who has reported on terrorism for over 30 years. He began his career covering Bloody Sunday, and his Troubles trilogy - `Provos', `Loyalists' and `Brits' - is considered to be the definitive account of the conflict. Following peace in Northern Ireland his focus switched to the new security threat posed by Al Qaeda and he has since presented two television series on the Islamic terror threat: `The New Al-Qaeda' and `The Age of Terror'. In 2002 he received an OBE for services to broadcasting, and in 2008 he was awarded the highly prestigious James Cameron Memorial Prize 'for work as a journalist that combined moral vision and professional integrity'.

GOR003427306
Talking to Terrorists: A Personal Journey from the IRA to Al Qaeda by Peter Taylor
Peter Taylor
Used - Very Good
Paperback
HarperCollins Publishers
2011-03-03
304
0007413076
9780007413072
N/A
Book picture is for illustrative purposes only, actual binding, cover or edition may vary.
This is a used book - there is no escaping the fact it has been read by someone else and it will show signs of wear and previous use. Overall we expect it to be in very good condition, but if you are not entirely satisfied please get in touch with us.