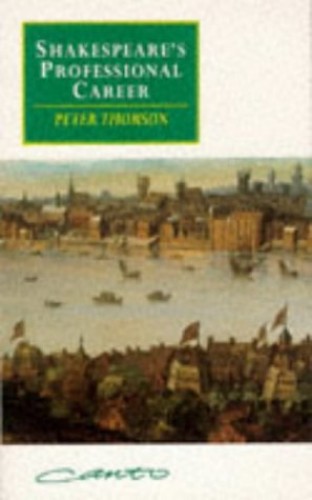 Out of Stock
$17.49
inc. GST
The story of Shakespeare's career as actor and playwright, which this book tells, shows the accommodation of his remarkable talents to the circumstances of his time: the social, political and professional life of Elizabethan and Jacobean England.
Very Good
Only 0 left

Shakespeare was a supremely successful accommodator. The story of his career as actor and playwright, which this book tells, shows the accommodation of his remarkable talents to the circumstances of his time: the social, political and professional life of Elizabethan and Jacobean England. It describes the development of this talent into genius against a background of theatrical rivalry, opportunism, service to noble patrons, and the sometimes involuntary involvement in political intrigue. The book begins with Stratford-upon-Avon and investigates Shakespeare's likely link with the Earls of Derby, going on to detail the theatrical conditions that prevailed when Shakespeare first embarked on his profession. Year by year Peter Thomson recreates Shakespeare's writing career, showing how the plays mirror their times. The story reveals the precarious nature of theatrical survival, the constant threat posed by the withdrawal of noble or royal patronage, the spread of disease, the anxieties of war and the uncertain climate. Peter Thomson's concern throughout is with the concrete details of the profession, incorporating the new evidence provided by the recent Rose and Globe excavations. The narrative is succinct but entertaining, enabling the non-expert to pick a clear path through contemporary political struggles and intrigues, the structure of Elizabethan patronage, the formation and disbanding of theatre companies and buildings. There are numerous illustrations gleaned from museums, libraries and great houses to illustrate the theatrical and social context of Elizabethan and Jacobean England.

."..will long serve as an excellent introduction to the Elizabethan stage." Magill's Literary Annual
"The book is an interesting amalgam of well-known facts mixed with matters perhaps not so familiar." Graham C. Adams, Essays in Theatre
."..an attractive recapitulation of information and speculation about Shakespeare with the intended focus being his professional life as an actor and writer of plays." Clifford Davidson, Renaissance Quarterly
"It is rare these days to read a scholarly book that is as beautifully written as Peter Thomson's Shakespeare's Professional Career. To enter the overtrodden ground of Shakespearean biography and politics can be a daunting prospect for reader and writer alike, but Thomson, with his lively pen and sharp, witty mind, makes it easy and pleasant to go over what we think we already know--and, with deceptive ease, offers new and interesting insights from his unusual perspective." Derek Cohen, American Theatre

List of illustrations; Acknowledgements; Preface; 1. Shakespeare and Stratford; 2. Establishing a career: of patrons and provinces; 3. Establishing a career: London, 1590; 4. A playtext and its content; 5. Servant to the Lord Chamberlain: 1594-1603; 6. Of Queen, Chamberlains, Admiral and King; 7. Servant to the King: 1603-1616; Notes; Bibliography; Index.

GOR003125236
Shakespeare's Professional Career by Peter Thomson
Peter Thomson
Canto original series
Used - Very Good
Paperback
Cambridge University Press
1994-03-25
229
0521466555
9780521466554
N/A
Book picture is for illustrative purposes only, actual binding, cover or edition may vary.
This is a used book - there is no escaping the fact it has been read by someone else and it will show signs of wear and previous use. Overall we expect it to be in very good condition, but if you are not entirely satisfied please get in touch with us.