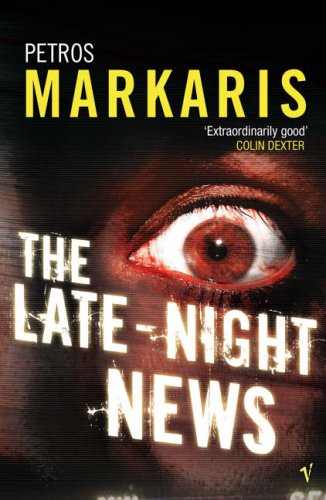 The Late-Night News
by Petros Markaris

Used Price
$43.99
inc. GST
Free Shipping in Australia
Costas Haritos, a CID chief in central Athens, is uncomfortably married, aggressive and pessimistic, and only manages to relax when he is at home reading his English dictionaries.
Reviews:
Trustpilot
Very Good Good

The Late-Night News by Petros Markaris

Costas Haritos, a CID chief in central Athens, is uncomfortably married, aggressive and pessimistic, and only manages to relax when he is at home reading his English dictionaries. A veteran of the force, he is only now coming to terms with the pervasive corruption in public and private life since the fall of the military dictatorship and the advent of democratic government. When an Albanian couple is found brutally slaughtered, it looks like an open and shut crime of passion. But when Yanna, a TV journalist investigating the same case, is murdered in a broadcasting studio just before going on air, Haritos begins to think he's missing something crucial in this seemingly simple case. Why was she so interested in whether the police had found evidence of the presence of children at the Albanians' home? When Yanna's successor at the TV station is also murdered, Haritos finds himself sucked ever deeper into the grubby world of the Greek media and the shadowy underworld of international child trafficking.

Petros Markaris was born in Istanbul in 1937. Having studied Economics, he made his literary debut in Greece in 1965 with a theatrical work, The Tale of Ali Retzo. This was followed by several other plays and by film scripts. Markaris recently published a Greek translation of Goethe's Faust to critical acclaim.

GOR001177642
The Late-Night News by Petros Markaris
Petros Markaris
Used - Very Good
Paperback
Vintage Publishing
2005-08-04
304
0099464624
9780099464624
N/A
Book picture is for illustrative purposes only, actual binding, cover or edition may vary.
This is a used book - there is no escaping the fact it has been read by someone else and it will show signs of wear and previous use. Overall we expect it to be in very good condition, but if you are not entirely satisfied please get in touch with us.