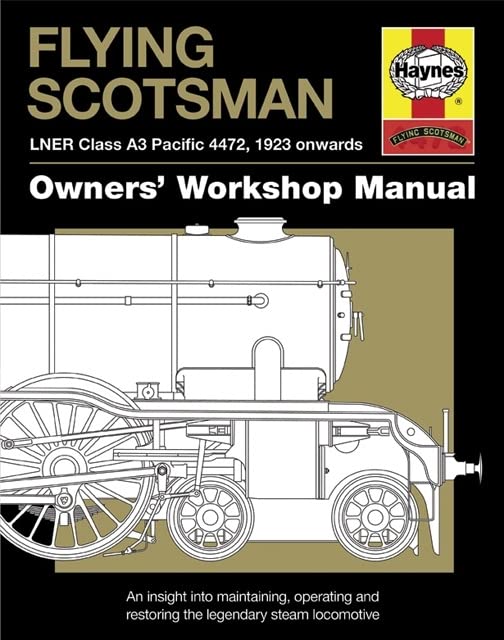 In Stock
$24.99
inc. GST
The legendary '4472' - better known as the Flying Scotsman - receives the famous "Haynes Manual" treatment with the full co-operation of the National Railway Museum. This title presents a fresh perspective on what is involved in maintaining, operating and restoring this Class A3 Pacific, the first steam locomotive to achieve 100mph.
Very Good
Only 1 left

The legendary `4472' - better known as the Flying Scotsman - receives the famous Haynes Manual treatment with the full co-operation of the National Railway Museum. Here is a unique perspective on what is involved in maintaining, operating and restoring this Class A3 Pacific, the first steam locomotive to achieve 100mph. This highly detailed manual, based around 4472's recent overhaul and subsequent return to main-line operation, also looks in detail at every aspect of its engineering and construction, providing a feast of information and insight.

Philip Atkins inherited his interest in railways and locomotives from his late father, who extensively photographed Gresley 'Pacifics' when they were in their prime before the Second World War. He had his first railway article published in 1966, and in 1975 he was appointed Librarian at the then new National Railway Museum in York, a post he held until he retired in 2006. He is married, with three grown-up children, and lives in Harrogate.

An official book: published in association with the National Railway Museum in York, and benefitting from full access to technical drawings and photographs taken during overhaul. Anatomy of 4472: full description of all constituent parts; changes from originality and authenticity; charting modifications made from new until the present day (including livery, smoke deflectors, double chimney, etc). Detailed description of the work undertaken by the National Railway Museum during the major overhaul from which 4472 emerged in the summer of 2011. Running the locomotive: preparing the loco for a day's run; raising steam, coaling and watering; taking from the shed to the train; coupling up, drawing away and getting up to speed; slowing down for signals and stations; arrival at destination, coming off the train and back to the depot for 'disposal' (dropping fire, cleaning etc). First-hand experiences from driver, fireman and engineer. Historical highlights: displayed at the British Empire Exhibition 1924/25; the first recorded 100mph run; rebuilding from A1 to A3 class in 1946; general duties on the LNER and BR; rescue for preservation and return to the main line; tours in the USA and Australia; saved for the nation.

GOR007435120
Flying Scotsman Manual: An insight into maintaining, operating and restoring the legendary steam locomotive by Philip Atkins
Philip Atkins
Used - Very Good
Hardback
Haynes Publishing Group
2016-03-16
160
1844257061
9781844257065
N/A
Book picture is for illustrative purposes only, actual binding, cover or edition may vary.
This is a used book - there is no escaping the fact it has been read by someone else and it will show signs of wear and previous use. Overall we expect it to be in very good condition, but if you are not entirely satisfied please get in touch with us.