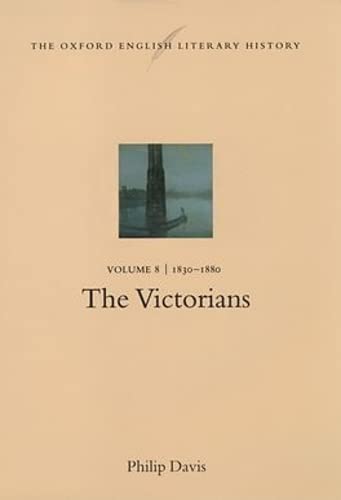 In Stock
$68.99
inc. GST
Looks at both canonical and non-canonical writings in their historical context. This book is for students and scholars. It demonstrates how the power of Victorian literature, not just the riches of its novels and poetry, but also non-fiction writings from Darwin to Ruskin and Mill, lies in its gift of asking questions with a personal insistence.
Very Good
Only 1 left

Heralding a new era in literary studies, the Oxford English Literary History breaks the mould of traditional approaches to the canon by focusing on the contexts in which the authors wrote and how their work was shaped by the times in which they lived. Each volume offers a fresh, ground-breaking re-assessment of the authors, their works, and the events and ideas which shaped the literary voice of their age. Written by some of the leading scholars in the field, under the general-editorship of Jonathan Bate, the Oxford English Literary History is essential reading for everyone studying, teaching, and researching in English literature. This volume covers the flowering of Victorian literature, from the decade when Tennyson started writing In Memoriam and Darwin embarked on the Beagle to the publication of Hardy's first great novels and the death of George Eliot. The Victorian era produced a literature of diversity and experimentation, engaged with powerful controversies and heartfelt arguments that lie at the centre of the formation of the modern world. It has often been misrepresented, either as an age of dull and rigid certainty or one of anxious and depressive morbidity, but what distinguishes the writing of the period - from its origins in the 1830s to its crisis point around 1880 - is its power of serious inquiry. It poses questions about the relation between society and the individual, the rival claims of market and morality, the form and function of democracy, and, above all, the existence or non-existence of God and the purposes of human life. Such concerns make this a time in which literature has a new urgency and vitality, and lies close to the heart of a culminating crisis of the Western conscience. less tied to the canonical authors and much more interested in placing both canonical and non-canonical writings in their historical context. These are books that every serious student and scholar of the period will need on their shelves.

About Philip Davis (Reader in English Literature, University of Liverpool)

Jonathan Bate (General Editor): FBA, Professor of English Literature, Warwick University, well known as a scholar of Shakespeare and the Renaissance, and of the Romantic period. The UK s leading exponent of ecocriticism . Most recent books: Shakespeare and Ovid, the Arden Titus Andronicus, The Genius of Shakespeare, a novel about William Hazlitt called The Cure for Love and The Song of the Earth. General editor of the Oxford English Literary History, for which he is writing the volume on the Elizabethans, and he is also engaged in a major biography of John Clare.

GOR003615719
The Oxford English Literary History: Volume 8: 1830-1880: The Victorians by Philip Davis (Reader in English Literature, University of Liverpool)
Philip Davis (Reader in English Literature, University of Liverpool)
Oxford English Literary History
Used - Very Good
Hardback
Oxford University Press
2002-11-01
648
0198184476
9780198184478
N/A
Book picture is for illustrative purposes only, actual binding, cover or edition may vary.
This is a used book - there is no escaping the fact it has been read by someone else and it will show signs of wear and previous use. Overall we expect it to be in very good condition, but if you are not entirely satisfied please get in touch with us.