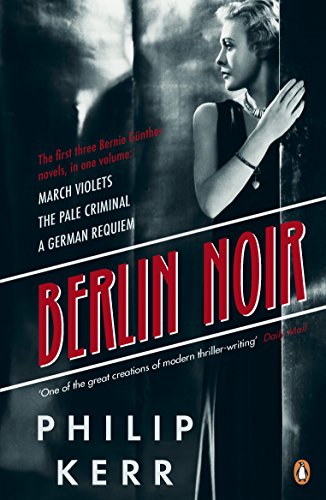 Used Price
$20.99
inc. GST
Free Shipping in Australia
Ex-Policeman Bernie Gunther thought he'd seen everything on the streets of 1930's Berlin. And even after the war, amidst the decayed, imperial splendour of Vienna, Bernie uncovered a legacy that made the wartime atrocities look lily-white in comparison.
Very Good Good Well Read

Discover the original Bernie Gunther stories that make up the late Philip Kerr's Berlin Noir: the tale of an ex-cop turned private investigator uncovering the corruption, lies, brutality and murder that lie at the heart of Nazi Germany in the Thirties and Forties.

Includes March Violets, The Pale Criminal and A German Requiem

Ex-policeman Bernie Gunther thought he'd seen everything on the streets of 1930s Berlin. But then he went freelance, and each case he tackled sucked him further into the grisly excesses of the Nazi regime.

From a vicious double murder and the search for a stolen necklace to the hunt for a serial sex murderer before the war and then the investigation of the death of an American soldier after it, Bernie Gunther hunts for the truth even as the fearful and guilty alike do everything to hide it.

'The Bernie Gunther novels are first-class, as stylish as Chandler and as emotionally resonant as the best of Ross Macdonald' George Pelecanos

Philip Kerr was born in Edinburgh and read Law at university. He stayed on to read Law and Philosophy as a postgraduate, most of this German, which was when he first became interested in German twentieth century history.

He worked first as a copywriter at a number of advertising agencies, including Saatchi & Saatchi, but spent most of his time researching an idea he'd had for a novel about a Berlin-based policeman. And following several trips to Germany - and a great deal of walking around mean streets of Berlin - his first novel, March Violets, was published in 1989 and introduced the world to the iconic tough-talking detective Bernie Gunther.

Since then he has written and published ten universally lauded Bernie Gunther novels, and is currently working on his eleventh. He has won both the RBA International Prize for Crime Writing, and the CWA Ellis Peters Historic Crime Award.

GOR004505850
Berlin Noir: March Violets, The Pale Criminal, A German Requiem by Philip Kerr
Philip Kerr
Used - Very Good
Paperback
Penguin Books Ltd
2012-06-07
880
0241962358
9780241962350
N/A
Book picture is for illustrative purposes only, actual binding, cover or edition may vary.
This is a used book - there is no escaping the fact it has been read by someone else and it will show signs of wear and previous use. Overall we expect it to be in very good condition, but if you are not entirely satisfied please get in touch with us.