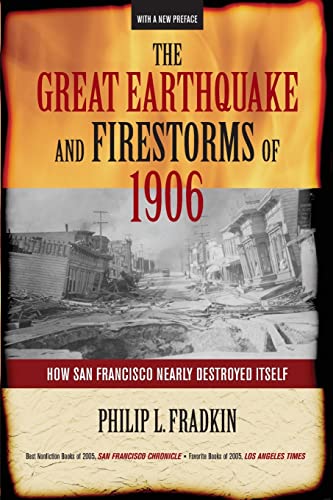 The Great Earthquake and Firestorms of 1906
by Philip L. Fradkin

Used Price
$22.49
inc. GST
Free Shipping in Australia
The first indication of the prolonged terror that followed the 1906 earthquake occurred when a ship steaming off San Francisco's Golden Gate 'seemed to jump clear out of the water'. This book presents an account of the earthquake, the devastating firestorms that followed, and the city's subsequent reconstruction.
Reviews:
Trustpilot
Very Good

The Great Earthquake and Firestorms of 1906 Summary

The Great Earthquake and Firestorms of 1906: How San Francisco Nearly Destroyed Itself by Philip L. Fradkin

The first indication of the prolonged terror that followed the 1906 earthquake occurred when a ship steaming off San Francisco's Golden Gate 'seemed to jump clear out of the water'. This gripping account of the earthquake, the devastating firestorms that followed, and the city's subsequent reconstruction vividly shows how, after the shaking stopped, humans, not the forces of nature, nearly destroyed San Francisco in a remarkable display of simple ineptitude and power politics. Bolstered by previously unpublished eyewitness accounts and photographs, this definitive history of a fascinating city caught in the grip of the country's greatest urban disaster will forever change conventional understanding of an event one historian called 'the very epitome of bigness'. Philip Fradkin takes us onto the city's ruptured streets and into its exclusive clubs, teeming hospitals and refugee camps, and its Chinatown. He introduces the people - both famous and infamous - who experienced these events, such as Jack and Charmian London, Enrico Caruso, James Phelan, and Abraham Ruef. He traces the horrifying results of the mayor's illegal order to shoot-to-kill anyone suspected of a crime, and he uncovers the ugliness of racism that almost led to war with Japan. He reveals how an elite oligarchy failed to serve the needs of ordinary people, the heroic efforts of obscure citizens, the long-lasting psychological effects, and how all these events ushered in a period of unparalleled civic upheaval. This compelling look at how people and institutions function in great catastrophes demonstrates just how deeply earthquake, fires, hurricanes, floods, wars, droughts, or acts of terrorism can shape us.

Customer Reviews - The Great Earthquake and Firestorms of 1906

The Great Earthquake and Firestorms of 1906 Reviews

"In this richly detailed retelling of the event, Philip Fradkin places that event within the cultural framework of the era, providing evocative descriptions of its immediate impact and the long-running effects it triggered. Whether already well-informed or merely curious, readers will find much new information as well as helpful perspective." - Bloomsbury Review "Fradkin is an impassioned writer who knows his subject.... He writes that he sees his book not just as a history but also as 'a disaster manual for the future.' I respectfully beg to differ. Rather than a manual for the future - of which there is no shortage - Fradkin has given us something much more valuable: a clear-eyed view of our past." - San Francisco Chronicle "A splendidly researched and well-written history of one of this country's great urban disasters.... While most historical accounts deal with the damage from the quake and the ensuing fires, Fradkin takes the reader well beyond the devastation to explore the aftermath, when a San Francisco oligarchy imposed its will on a fractured city and displayed an ugly racism and human nature at its sometimes worst.... With a reporter's eye for detail, Fradkin delivers in a most compelling fashion." - Sacramento Bee"

I
BEFORE
Beginnings
The Tale of Two Cities
Science, Politics, and San Francisco
The Hotel and the Opera House

GOR004833226
The Great Earthquake and Firestorms of 1906: How San Francisco Nearly Destroyed Itself by Philip L. Fradkin
Philip L. Fradkin
Used - Very Good
Paperback
University of California Press
2006-03-10
448
0520248201
9780520248205
N/A
Book picture is for illustrative purposes only, actual binding, cover or edition may vary.
This is a used book - there is no escaping the fact it has been read by someone else and it will show signs of wear and previous use. Overall we expect it to be in very good condition, but if you are not entirely satisfied please get in touch with us.