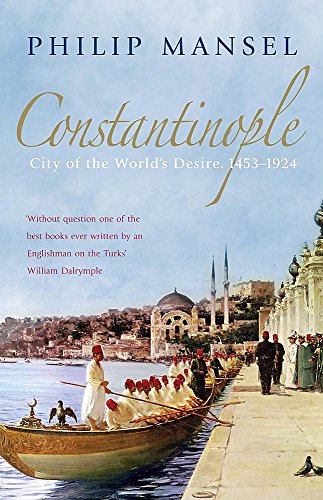 Constantinople: City of the World's Desire, 1453-1924 by Philip Mansel

Philip Mansel's highly acclaimed history of Constantinople (formerly known as Byzantium) absorbingly charts the interaction between the vibrantly cosmopolitan capital - the city of the world's desire - and its ruling family.

In 1453, Mehmed the Conqueror entered Constantinople on a white horse, beginning an Ottoman love affair with the city that lasted until 1924, when the last Caliph hurriedly left on the Orient Express. For almost five centuries Constantinople, with its enormous racial and cultural diversity, was the centre of the dramatic and often depraved story of an extraordinary dynasty.

'An endless treasure chest of fascinating facts and extraordinary revelations ... a cultural and social history as much as a political and military one, Mansel's outstandingly researched portrait of this intriguing imperial city and its exotic denizens is gripping' * Robert Carver, Scotsman *
'The victory, the defeat, the magnificence, the squalor, the cruelty and the tolerance of the Ottoman years are all recorded there, Constantinople is one of those cities to which I always long to return, and the longing grows on every page' * Noel Malcolm, Sunday Telegraph *
'Marvellous ... the experience of the whole city grows with the book ... you always feel close to the beat of Constantinople's raffish and mysterious heart' * Michael Ratcliffe, Observer *
'A happy blend of shcolarship and panache ... If you have visited Constantinople, read it: if not, buy it before you go' Lawrence James, Evening Standard * Lawrence James, Evening Standard *
'Plenty of intrigue and bloodshed. The squeamish should skip the city's solution to the stray dog problem... and focus on the convincingly documented and colourful ebb and flow of economy and society' * Charmaine Chan, South China Morning Post *

Philip Mansel is a historian of courts and dynasties. His books include a study of the Court of France, a history of Constantinople, Paris between Empires, and a life of the Prince de Ligne. He has written for numerous publications, including the Financial Times, the International Herald Tribune, the TLS and the Spectator. He is a Fellow of the Royal Historical Society and the Institute of Historical Research and editor of The Court Historian. His web-site can be consulted at www.philipmansel.com

GOR003039374
Constantinople: City of the World's Desire, 1453-1924 by Philip Mansel
Philip Mansel
Used - Very Good
Paperback
John Murray Press
2006-10-19
560
0719568803
9780719568800
N/A
Book picture is for illustrative purposes only, actual binding, cover or edition may vary.
This is a used book - there is no escaping the fact it has been read by someone else and it will show signs of wear and previous use. Overall we expect it to be in very good condition, but if you are not entirely satisfied please get in touch with us.