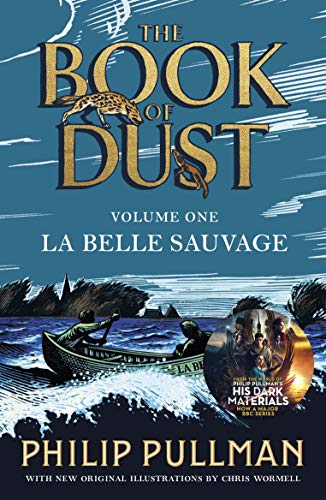 La Belle Sauvage: The Book of Dust Volume One
by Philip Pullman

La Belle Sauvage: The Book of Dust Volume One Summary

La Belle Sauvage: The Book of Dust Volume One by Philip Pullman

*Now coming to the stage in the summer of this year! Performed at The Bridge Theatre from July 2020, it will be a theatrical spectacle not to be missed*

Malcolm Polstead's Oxford life has been one of routine, ordinary even.

He is happiest playing with his daemon, Asta, in their canoe, La Belle Sauvage. But now as the rain builds, the world around Malcolm and Asta it seems is set to become increasingly far from ordinary.

Finding himself linked to a baby by the name of Lyra Belacqua, Malcolm is forced to undertake the challenge of his life and to make a dangerous journey that will change him and Lyra for ever . . .

La Belle Sauvage: The Book of Dust Volume One Reviews

Fans of His Dark Materials will find themselves joyfully immersed in a familiar world . . . meanwhile, awaiting first-time readers is all the pleasure of commencing their own journey into this most captivating of universes at the very beginning of Lyra's story * Independent *
A rich, imaginative, vividly characterised rite-of-passage tale * Nicolette Jones, The Sunday Times *
High-octane adventure accompanies ingenious plotting * The Times *

Philip Pullman is one of the most highly respected children's authors writing today. Winner of many prestigious awards, including the Carnegie of Carnegies and the Whitbread Award, Pullman's epic fantasy trilogy His Dark Materials has been acclaimed as a modern classic. It has sold 17.5 million copies worldwide and been translated into 40 languages. In 2005 he was awarded the Astrid Lindgren Memorial Award. He lives in Oxford.

GOR009344763
La Belle Sauvage: The Book of Dust Volume One by Philip Pullman
Philip Pullman
Used - Like New
Paperback
Penguin Random House Children's UK
2018-09-03
592
0241365856
9780241365854
N/A
Book picture is for illustrative purposes only, actual binding, cover or edition may vary.
The book has been read, but looks new. The book cover has no visible wear, and the dust jacket is included if applicable. No missing or damaged pages, no tears, possible very minimal creasing, no underlining or highlighting of text, and no writing in the margins.