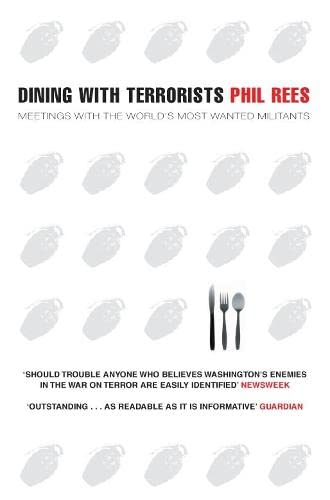 Dining With Terrorists
by Philip Rees

In Stock
$11.49
+10% GST
Phil Rees takes us into the world of the political activist and guerrilla fighter and sits us down at their table
Very Good
Only 2 left

Dining With Terrorists by Philip Rees

Featuring a brand new chapter on 7/7, this fiercely intelligent expose is the culmination of twenty years' research. By infiltrating the most inaccessible political resistance groups, hardened reporter Phil Rees has sought to understand what motivates the `terrorist' or `freedom fighter' and to weigh this against current world events and the sweeping power of US military might. In his discussions with groups in such diverse countries as Colombia, Algeria, Kosovo, Indonesia, Sri Lanka, Iran, Lebanon, France, Cambodia and Ireland, Rees seeks to pierce the propaganda, to discover the human story behind the faceless, hooded caricature, and to test our preconceptions of just what the word terrorist actually means.

'The most exhaustive expose of the ideas of the Noam-Chomsky/Michael-Moore school . . . he is a good reporter and a congenial gourmet' Sunday Telegraph

An award-winning journalist, Phil Rees has worked on 'Correspondent' and 'Newsnight' for the BBC and written for the Independent, Guardian and the New Statesman. Over 20 years he has made more than 30 documentaries and has won a dozen international awards. He lives in London.

GOR002692250
Dining With Terrorists by Philip Rees
Philip Rees
Used - Very Good
Paperback
Pan Macmillan
2006-05-05
400
0330433059
9780330433051
N/A
Book picture is for illustrative purposes only, actual binding, cover or edition may vary.
This is a used book - there is no escaping the fact it has been read by someone else and it will show signs of wear and previous use. Overall we expect it to be in very good condition, but if you are not entirely satisfied please get in touch with us.