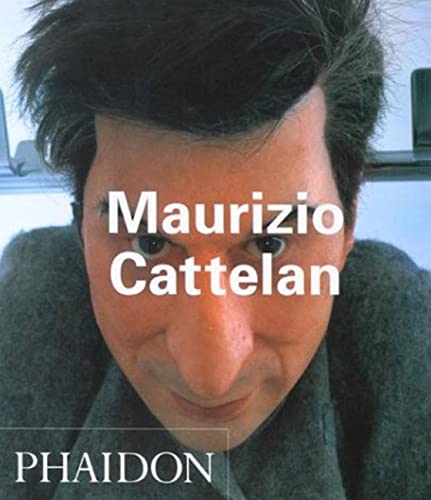 Out of Stock
$25.99
+10% GST
In a special mini format devised by the famously irreverent Italian artist.
Very Good
Only 0 left

Maurizio Cattelan (b.1960) is today's best-known Italian artist. In some ways an heir to the legendary Italian 'anti-artist' Piero Manzoni, Cattelan produces witty, unorthodox performances, sculptures and photoworks that are as varied as they are unsettling. This humorous, untraditional art often takes an off-centre standpoint at the margins of mainstream society to poke fun at art history, monumentality and nationalism.

Cattelan was once a furniture designer, which infuses all his unconventional work with a surprising elegance that is especially striking. He works in a great variety of media. Examples include a real stuffed horse hung from the magnificent ceiling of a great Italian Palazzo (Novecento, 1997) in reference to Arte Povera artist Jannis Kounellis' exhibition of 12 real horses in Rome some thirty years before; and a 'homeless person' mannequin, realistically slumped on a city sidewalk, the lifeless reminder of the wasted human lives we witness daily in city streets.

References to Arte Povera, classic Italian figurative sculpture and much post-war art and culture are blended in Cattelan's work with the artist's own idiosyncracies. Over the years, Cattelan - working with themes that vary from thievery to escapism to childhood - has consistently produced significant artworks that have captured the attention of the international art world and established him as one of the most exciting artists working today.

Italian curator and critic Francesco Bonami describes in his Survey the artist's development in his local political and socio-historical context. In the Interview, critic and Solomon R. Guggenheim Museum curator Nancy Spector draws out the aritist's 'slippery' personality while offering solid interpretations of the work. Belgium-based curator and writer Barbara Vanderlinden offers a firsthand response in the Focus to Cattelan's monumental project first shown at Manifesta 2 (1998), an untitled work consisting of a living tree growing from an exposed block of soil within the exhibition space itself. Cattelan has chosen an extract from Portnoy's Complaint (1969) by Philip Roth and extracts from ...Or Not to Be: A Collection of Suicide Notes (ed. Marc Etkind, 1997), both echoing the artist's often tragi-comical evocations of desperation and escapism. Maurizio Cattelan's statements and previous interviews, collected here, include his occasional appropriation of the words and even identities of others. In the Update section, critic and curator Massimiliano Gioni surveys Cattelan's work from 2000 to the present.

"Quite possibly i-D's favourite Italian artists since Caravaggio, Maurizio Cattelan's one and only monograph is released this month in a new updated mini-format edition. And before you can scream 'cheap pocket-sized cash in', the size of the book itself has been conceived by Cattelan himself as a sculpture in itself: an extension of his ongoing work playing with the conventions of scale... An essential - and unobtrusive - addition to your art collection, let alone your book collection."-i-D

"[...] Phaidon have put within reach the complete works of Maurizio Cattelan."-b-guided

"This book is a truly superb production. It should be enjoyed by everyone interested in contemporary art or just puzzled by the seeming obscurities of Postmodernism."-World of Interiors

On the Contemporary Artists Series

"The boldest, best executed, and most far-reaching publishing project devoted to contemporary art. These books will revolutionize the way contemporary art is presented and written about."-Artforum

"The combination of intelligent analysis, personal insight, useful facts and plentiful pictures is a superb format invaluable for specialists but also interesting for casual readers, it makes these books a must for the library of anyone who cares about contemporary art."-Time Out

"Gives the reader the impression of a personal encounter with the artists. Apart from the writing which is lucid and illuminating, it is undoubtedly the wealth of lavish illustrations which makes looking at these books a satisfying entertainment."-The Art Book

Francesco Bonami is Manilow Senior Curator at the Museum of Contemporary Art, Chicago, as well as Artistic Director of the Fondazione Sandretto ReRebaudengo per l'Arte in Turin, Fondazione Pitti Discovery in Florence and the Centro di Arte Contemporanea Villa Manin. He was the director of the 50th Venice Biennale (2003) and Co-Curator of Manifesta 3 (2000).

Nancy Spector is Curator of Contemporary Art at the Solomon R Guggenheim Museum, New York. Her exhibitions there have included 'Felix Gonzalez-Torres' (1995), 'Robert Rauschenberg: Performance' (1997) and 'Andreas Slominski' (1999). Spector is a regular contributor to Artforum, Parkett and Frieze.

Barbara Vanderlinden (Focus) is an independent curator who founded and directs the independent exhibition space 'Roomade' in Brusssels. In 1998 she co-curatored of Manifesta 2 (Luxembourg, 1998), which included a new work by Maurizio Cattelan.

Massimiliano Gioni is Curator of Fondazione Trussardi, Milan, and a founding Director of The Wrong Gallery, New York. He has co-curated such international exhibitions as Manifesta 5 (San Sebastian, 2004) and the 4th Berlin Biennial (2006).

Interview - Cattelan's 'slippery' personality shines through while critic and Guggenheim Museum curator Nancy Spector offers solid interpretative responses to the subversive strategies behind Cattelan's work. Survey - International curator Francesco Bonami sets the work in the context of recent Italian political and social history. His work-by-work analysis is divided into the main themes in Cattelan's work (autobiography, the allegorical use of animals, politics, and so forth) to draw together coherently Cattelan's varied body of work. Focus - Curator Barbara Vanderlindern offers a first hand response to the work Cattelan made for Manifesta 2, 1998, co-curated by Vanderlinden): an untitled work consisting of a living uprooted tree, growing in a block of dirt inside the exhibition space itself. Artist's Choice - The two selections combine issues dear to the artist's heart: adolescence, sex and death. In Philip Roth's Portnoy's Complaint, the teenage Alexander Portnoy describes his new-found obsession with masturbation; and suicide letters are chosen from... Or Not To Be: A Collection of Suicide Notes (ed. Marc Etkind, 1997). (True to the artist's characteristic avoidance of responsibility, Cattelan has asked an anonymous editorial assistant to select one of his Artist's Choices on his behalf.) Artist's Writings - Previous interviews are included from the artist's early years - including an interview notoriously 'stolen' from another artist - and a recent discussion with the curator of his 2003 'retrispective' at Los Angeles MoCA, Massimilano Gioni Update - Maurizio Ccatelan's closest collaborator and spokesperson, Massimiliano Gioni, offers an especially insightful look at this enigmatic, uncompromising artist, examining the artist's uncanny, often dangerous will to provoke his audience. Recent examples include The Elerventh Hour, a realistic sculpture of the Pop being hit by a meteorite, or a wax scultpure of miniaturized Adolf Hitler. Chronology and Bibliography

GOR002015532
Maurizio Cattelan by Philip Roth
Philip Roth
Phaidon Contemporary Artists Series
Used - Very Good
Paperback
Phaidon Press Ltd
2003-04-25
212
0714843067
9780714843063
N/A
Book picture is for illustrative purposes only, actual binding, cover or edition may vary.
This is a used book - there is no escaping the fact it has been read by someone else and it will show signs of wear and previous use. Overall we expect it to be in very good condition, but if you are not entirely satisfied please get in touch with us.