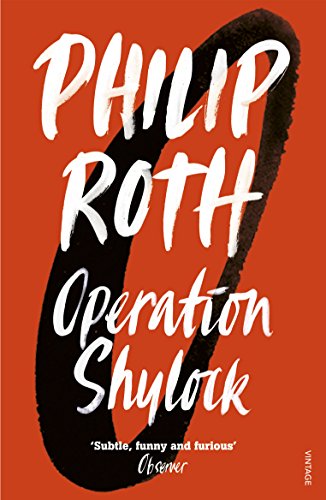 In Stock
$20.49
inc. GST
Startlingly, Philip Roth meets a man in Jerusalem called Philip Roth who has been touring Israel - riding high on the author's reputation - preaching a bizarre reverse-exodus of the Jews, encouraging them to return to their ancestral homes in Europe.
Very Good Good Well Read
Only 2 left

'Subtle, funny and furious' Observer What if a lookalike stranger stole your name, hijacked your biography, and went about the world pretending to be you? Startlingly, Philip Roth meets a man in Jerusalem called Philip Roth who has been touring Israel - riding high on the author's reputation - preaching a bizarre reverse-exodus of the Jews, encouraging them to return to their ancestral homes in Europe. Roth decides to stop him, even if that means impersonating the impersonator. Operation Shylock is at once spy story, political thriller, meditation on identity and unfathomable journey through a volatile, frightening middle-east.

"Subtle, funny and furious" * Observer *
"An astoundingly accomplished piece of work" * Guardian *
"Nothing short of stunning" * London Review of Books *
"A very buoyant book, part truth, part fiction, combining sophistication with an equally beguiling vulgarity...it does leave one relishing it and wanting to read more" * Spectator *

GOR001413706
Operation Shylock: A Confession by Philip Roth
Philip Roth
Used - Very Good
Paperback
Vintage Publishing
1994-06-16
400
009930791X
9780099307914
Short-listed for Pulitzer Prize for Fiction 1995
Book picture is for illustrative purposes only, actual binding, cover or edition may vary.
This is a used book - there is no escaping the fact it has been read by someone else and it will show signs of wear and previous use. Overall we expect it to be in very good condition, but if you are not entirely satisfied please get in touch with us.