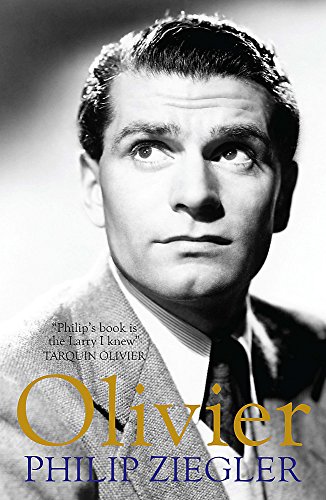 Hollywood superstar; Oscar-winning director; greatest stage actor of the twentieth century. His era abounded in greats - Gielgud, Richardson, Guinness, Burton, O'Toole - but none could challenge Laurence Olivier's range and power. By the 1940s he had achieved international stardom. His affair with Vivien Leigh led to a marriage as glamorous and as tragic as any in Hollywood history. He was as accomplished a director as he was a leading man: his three Shakespearian adaptations are among the most memorable ever filmed. Off-stage, Olivier was the most extravagant of characters: generous, yet almost insanely jealous of those few contemporaries whom he deemed to be his rivals; charming but with a ferocious temper. With access to more than fifty hours of candid, unpublished interviews, Philip Ziegler ensures that Olivier's true character - at its most undisguised - shines through as never before.

'A triumph ... It succeeds, as far as is humanly possible, in bringing alive on the page Olivier's magnetic theatrical presence, which those who saw him act will never forget' John Carey, Sunday Times. * Sunday Times *
'An elegant and increasingly compelling book' Simon Callow, Guardian. * Guardian *
'Without adulation, sentimentality and or sneer, layer by layer as the 82 years of Olivier's life flow by Ziegler painstakingly uncovers a portrait of a real man. It is enthralling. I took it on holiday and could hardly bear to finish it ... tremendous' Libby Purves, The Times. * The Times *
'Philip Ziegler's splendid biography confirms the contention that Lord Olivier OM is as great a figure in the history of the English theatre as David Garrick or Sir Henry Irving' Economist. * Economist *
'Philip's book is the Larry I knew' Tarquin Olivier. * Tarquin Olivier *

Philip Ziegler was a diplomat before becoming an editorial director at the publishers William Collins. His many books include acclaimed biographies of Laurence Olivier, William IV, Lady Diana Cooper, Lord Mountbatten and Harold Wilson, as well as the classic history of the Black Death.

GOR006164098
Olivier by Philip Ziegler
Philip Ziegler
Used - Very Good
Paperback
Quercus Publishing
2014-09-04
464
1782067884
9781782067887
N/A
Book picture is for illustrative purposes only, actual binding, cover or edition may vary.
This is a used book - there is no escaping the fact it has been read by someone else and it will show signs of wear and previous use. Overall we expect it to be in very good condition, but if you are not entirely satisfied please get in touch with us.