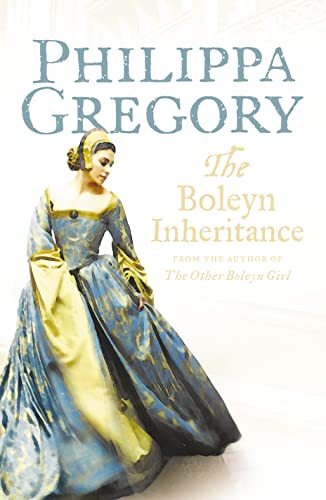 The Boleyn Inheritance
by Philippa Gregory

From the bestselling author of 'The Other Boleyn Girl', Philippa Gregory, comes a wonderfully atmospheric evocation of the court of Henry VIII and his final queens.

The Boleyn Inheritance by Philippa Gregory

From the bestselling author of 'The Other Boleyn Girl', Philippa Gregory, comes a wonderfully atmospheric evocation of the court of Henry VIII and his final queens.

The year is 1539 and the court of Henry VIII is increasingly fearful at the moods of the ageing sick king. With only a baby in the cradle for an heir, Henry has to take another wife and the dangerous prize of the crown of England is won by Anne of Cleves.

She has her own good reasons for agreeing to marry a man old enough to be her father, in a country where both language and habits are foreign. Although fascinated by the glamour of her new surroundings, she senses a trap closing around her.

Catherine is confident that she can follow in the steps of her cousin Anne Boleyn to dazzle her way to the throne but her kinswoman Jane Boleyn, haunted by the past, knows that Anne's path led to Tower Green and to an adulterer's death.

The story of these three young women, trying to make their own way through the most volatile court in Europe at a time of religious upheaval and political uncertainty is Philippa Gregory's most intense novel yet.

Praise for 'The Constant Princess':

'One of Gregory's great strengths as a novelist is her ability to take familiar historical figures and flesh them into living breathing human beings. "The Constant Princess" is a worthy successor to her previous novels about the Tudors and deserves to be a bestseller.' Daily Express

'Gregory's research is impeccable which makes her imaginative fiction all the more convincing.' Daily Mail

'Gregory is great at conjuring a Tudor film-set of gorgeous gowns and golden-plattered dining.' Telegraph

'The contemporary mistress of historical crime. Her novels are filled with strong, determined women who take their fate into their own hands...Gregory brings to life the sights, smells and textures of 16th-century England.' Kate Mosse, Financial Times

'Gregory vividly reconstructs life in the Spanish royal household, and contributes to the sense of Katherine's foreignness.' The Times

GOR001024878
The Boleyn Inheritance by Philippa Gregory
Philippa Gregory
Used - Very Good
Paperback
HarperCollins Publishers
2006-08-28
528
0007233310
9780007233311
N/A
Book picture is for illustrative purposes only, actual binding, cover or edition may vary.
This is a used book - there is no escaping the fact it has been read by someone else and it will show signs of wear and previous use. Overall we expect it to be in very good condition, but if you are not entirely satisfied please get in touch with us.