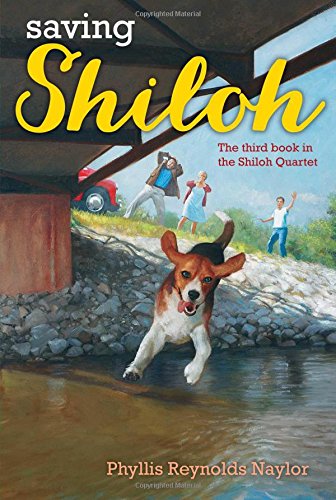 In Stock
$12.49
+10% GST
Sixth-grader Marty and his family try to help their rough neighbor, Judd Travers, change his mean ways, even though their West Virginia community continues to expect the worst of him.
Very Good
Only 1 left

Marty Preston wonders why it is that despite Judd Traver's attempts to redeem himself everyone is still so willing to think the worst of him. Marty's friend David is sure that Judd will be named as the murderer of a man who has been missing. Others are sure that Judd is behind a series of burglaries in the area. But Marty's parents and, with some trepidation, Marty himself persist in their attempts to be good neighbors and to give Judd a second chance. Now that Marty has Shiloh, maybe he can help Judd to take better care of his other dogs. Then again, maybe folks are right -- there's no way a Judd Travers can ever change for the good. Then a terrifying life-or-death situation brings this dilemma into sharp focus. "Saving Shiloh" is a powerful novel that brings this trilogy to a close.

"Reads like a nail-biting mystery...Gripping and ultimately satisfying. [A] masterfully written conclusion to a sterling trilogy."

Phyllis Reynolds Naylor has written more than 135 books, including the Newbery Award-winning Shiloh and its sequels, the Alice series, Roxie and the Hooligans, and Roxie and the Hooligans at Buzzard's Roost. She lives in Gaithersburg, Maryland. To hear from Phyllis and find out more about Alice, visit AliceMcKinley.com.

Mike Wimmer has illustrated many books for children, including Home Run: The Story of Babe Ruth by Robert Burleigh, which was named an ALA Notable Children's Book and was called a "grand slam" in a starred review in Publishers Weekly. He also illustrated Flight: The Journey of Charles Lindbergh by Robert Burleigh, which received the Orbis Pictus Award for nonfiction. He lives in Oklahoma with his family.

GOR001977554
Saving Shiloh by Phyllis Reynolds Naylor
Phyllis Reynolds Naylor
Used - Very Good
Paperback
Simon & Schuster Ltd
1999-02-01
144
0689814615
9780689814617
Winner of Young Hoosier Book Award (Grades 4-6) 2000 Winner of Colorado Children's Book Award (Junior Novel) 2000 Short-listed for Buckeye Children's Book Award (Grades 3-5) 2001
Book picture is for illustrative purposes only, actual binding, cover or edition may vary.
This is a used book - there is no escaping the fact it has been read by someone else and it will show signs of wear and previous use. Overall we expect it to be in very good condition, but if you are not entirely satisfied please get in touch with us.