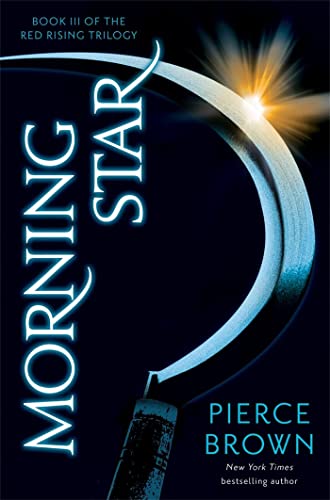 Used Price
$23,49
inc. GST
Free Shipping in Australia
Ender's Game meets The Hunger Games in this, the final installment of an extraordinary trilogy from an incredible voice.
Very Good

Darrow is a Helldiver, one of a thousand men and women who live in the vast caves beneath the surface of Mars, generations of people who spend their lives toiling to mine the precious elements that will allow the planet to be terraformed. Just knowing that, one day, people will be able to walk the surface of the planet is enough to justify their sacrifice. The Earth is dying, and Darrow and his people are the only hope humanity has left.

Until the day Darrow learns that it is all a lie. That Mars has been habitable - and inhabited - for generations, by a class of people calling themselves the Golds. A class of people who look down at Darrow and his fellows as slave labour, to be exploited and worked to death without a second thought.

Until the day Darrow, with the help of a mysterious group of rebels, disguises himself as a Gold and infiltrates their society.

Pierce Brown is the author of Red Rising, the first installment in a science fiction trilogy. Though Brown was born in Denver, Colorado, his origins are a little more diverse, having called seven states home (Colorado, North Carolina, Arizona, Iowa, Texas, Washington, and California). Now twenty-four, he splits his time between Seattle and Los Angeles.

GOR008113799
Morning Star: Red Rising Series 3 by Pierce Brown
Pierce Brown
Red Rising Series
Used - Very Good
Paperback
Hodder & Stoughton
2016-09-27
544
1444759078
9781444759075
N/A
Book picture is for illustrative purposes only, actual binding, cover or edition may vary.
This is a used book - there is no escaping the fact it has been read by someone else and it will show signs of wear and previous use. Overall we expect it to be in very good condition, but if you are not entirely satisfied please get in touch with us.