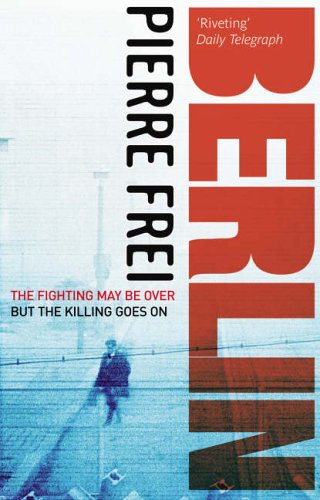 Berlin, A Novel
by Pierre Frei

Berlin, A Novel by Pierre Frei

Occupied Berlin, 1945, American Sector. A young man inadvertently uncovers the body of a beautiful young woman trapped under a subway station: she has been sexually abused and strangled with a chain. In the scramble to identify the body, the victim is mistaken for an American and a local investigation becomes a matter for the US Military police. When the bodies of other young women are discovered it becomes clear that this is no isolated act of violence.

Daring, atmospheric and taut, Pierre Frei has fashioned a gripping thriller from the wreckage of Berlin. There is a powerful pulse buried deep in the rubble. The fighting may be over, but the killing goes on.

Riveting * Daily Telegraph *
One of the best novels I've ever read set in this era * John Lawton, author of Black Out *
'Filled with brilliantly drawn characters, mesmerisingly readable and disturbingly convincing.' * Susanna Yager, Sunday Telegraph *
'Berlin itself, the city and its inhabitants, meticulously observed and depicted... emerges as the true star of the story, flawed, cruel, seductively engaging and all too human. This is its best evocation since Len Deighton's Winter.' * Peter Millar, The Times *

Pierre Frei was born in 1930 and grew up in Berlin. He worked as a freelance foreign correspondent, reporting from Rome, Cairo, New York and London, before retiring to his farm in Wales. Since 1990, Pierre Frei has lived at his chateau in south-west France.

GOR001399278
Berlin, A Novel by Pierre Frei
Pierre Frei
Used - Very Good
Paperback
Atlantic Books
2006-07-13
432
1843543249
9781843543244
N/A
Book picture is for illustrative purposes only, actual binding, cover or edition may vary.
This is a used book - there is no escaping the fact it has been read by someone else and it will show signs of wear and previous use. Overall we expect it to be in very good condition, but if you are not entirely satisfied please get in touch with us.