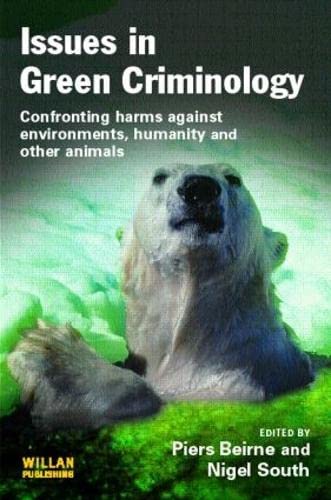 As all societies face up to the need to confront harms against environments, other animals and humanity, criminology will have a major role to play. This book acts as a resource on green criminology, focusing on the whys, the hows and the whens of the generation and control of the many aspects of harm to environments and animals, including humans.

Issues in Green Criminology: confronting harms against environments, humanity and other animals aims to provide, if not a manifesto, then at least a significant resource for thinking about green criminology, a rapidly developing field.

It offers a set of specially written introductions and a variety of current and new directions, wide-ranging in scope and international in terms of coverage and contributors. It provides focused discussions of current and cutting edge issues that will influence the emergence of a coherent perspective on green issues. The contributors are drawn from the leading thinkers in the field. The twelve chapters of the book explore the myriad ways in which governments, transnational corporations, military apparatuses and ordinary people going about their everyday lives routinely harm environments, other animals and humanity.

The book will be essential reading not only for students taking courses in colleges and universities but also for activists in the environmental and animal rights movements. Its concern is with an ever-expanding agenda the whys, the hows and the whens of the generation and control of the many aspects of harm to environments, ecological systems and all species of animals, including humans. These harms include, but are not limited to, exploitation, modes of discrimination and disempowerment, degradation, abuse, exclusion, pain, injury, loss and suffering. Straddling and intersecting these many forms of harm are key concepts for a green criminology such as gender inequalities, racism, dominionism and speciesism, classism, the north/south divide, the accountability of science, and the ethics of global capitalist expansion.

Green criminology has the potential to provide not only a different way of examining and making sense of various forms of crime and control responses (some well known, others less so) but can also make explicable much wider connections that are not generally well understood. As all societies face up to the need to confront harms against environments, other animals and humanity, criminology will have a major role to play. This book will be an essential part of this process.

Piers Beirne is Professor of Criminology and Legal Studies at the University of Southern Maine. Nigel South is Pro Vice Chancellor of the Department of Sociology at Essex University. His recent books include Criminology: A Sociological Introduction, with E. Carrabine, P. Iganski, M. Lee and K. Plummer (Routledge, 2004), Drug Use and Cultural Contexts - Beyond the West, with R. Coomber (Free Association Books, 2004), Crime in Modern Britain, with E. Carrabine, P. Cox and M. Lee (Oxford University Press, 2002).
Introduction: Approaching green criminology, Piers Beirne and Nigel South Part 1: Introduction to Green Criminology 1. Ecology, community and justice: The meaning of green, Ted Benton 2. Green criminology and the pursuit of social and ecological justice, Rob White 3. Animal rights, animal abuse and green criminology, Piers Beirne Part 2: Animal Rights and Animal Abuse 4. Labelling animals. Non-speciesist criminology and techniques to identify other animals, Geertrui Cazaux 5. Vivisection: The case for abolition, Tom Regan 6. Debating 'animal rights' on-line: The movementcountermovement dialectic, Roger Yates Part 3: Ecological Systems and Environmental Harms 7. At risk: Climate change and its bearing on women's vulnerability to male violence, Sandra Wachholz 8. Crime, regulation and radioactive waste in the United Kingdom, Reece Walters 9. Food crime, Hazel Croall 10. The 'corporate colonisation of nature': Bio-prospecting, bio-piracy and the development of green criminology, Nigel South 11. Green criminology in the United States, Michael J. Lynch and Paul Stretesky 12. Eco-crime and formal and informal law-enforcement in South Africa, Maria Hauck
GOR004839803
Issues in Green Criminology by Piers Beirne (University of Southern Maine, USA)
Piers Beirne (University of Southern Maine, USA)
Used - Very Good
Paperback
Taylor & Francis Ltd
2007-01-01
336
1843922193
9781843922193
N/A
Book picture is for illustrative purposes only, actual binding, cover or edition may vary.
This is a used book - there is no escaping the fact it has been read by someone else and it will show signs of wear and previous use. Overall we expect it to be in very good condition, but if you are not entirely satisfied please get in touch with us
Trustpilot