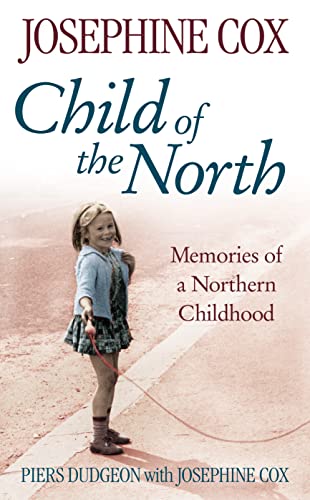 Child of the North
by Piers Dudgeon

A fascinating insight into the life of one of the country's bestselling and best-loved authors, marrying her work with her extraordinary life, and looking at her rise to fame and fortune against all the odds.

Child of the North Summary

Child of the North by Piers Dudgeon

A fascinating insight into the life of one of the country's bestselling and best-loved authors, marrying her work with her extraordinary life, and looking at her rise to fame and fortune against all the odds.

`Everything I have touched in my life figures in my books. Every single book I write has something that has happened to me or my family or to my friends.'

Josephine Cox was born in Blackburn during its decline as the cotton-weaving capital of the world. Life was hard but characterful, the joys and tragedies of her youth later inspiring her multi-million selling novels.

One of ten children, Josephine knew poverty, hunger and charity. Between births, her mother worked in the cotton mills, her father on the roads. Sleeping up to six in a bed, her family lived in the tightly packed, working-class terraces of Blackburn. But Josephine never felt victimised or shamed.

Transforming their closed-in community into one that inspired `another kind of love, a deep sense of belonging' were the characters Josephine writes about in her novels with such fondness and feeling.

But alas reality was not always so easy. Hand in hand with poverty came deprivation and domestic difficulties. At the end of her tether, Jo's mother gathered her children around her in the bus station one day and announced they were leaving Blackburn. Josephine was fourteen years old. Not only did she lose her friends, she also lost her brothers too who were left behind. `Belonging to a street, to a place, to a family, is the most important thing.' Out of this tremendous loss, Josephine's novels were born.

Piers Dudgeon is a writer, editor and photographer. Born in 1949, he worked for ten years as a publisher in London before starting his own company and developing books with authors as diverse as John Fowles, Ted Hughes, Daphne du Maurier, Catherine Cookson, Peter Ackroyd and Susan Hill. He has written fifteen works of non-fiction, including the no. 1 bestselling biography of Catherine Cookson, The Girl from Leam Lane, as well as feature articles for the Observer, the Daily Telegraph and the Mail on Sunday.

GOR000290227
Child of the North by Piers Dudgeon
Piers Dudgeon
Used - Very Good
Paperback
HarperCollins Publishers
2005-10-24
320
0007202784
9780007202782
N/A
Book picture is for illustrative purposes only, actual binding, cover or edition may vary.
This is a used book - there is no escaping the fact it has been read by someone else and it will show signs of wear and previous use. Overall we expect it to be in very good condition, but if you are not entirely satisfied please get in touch with us.