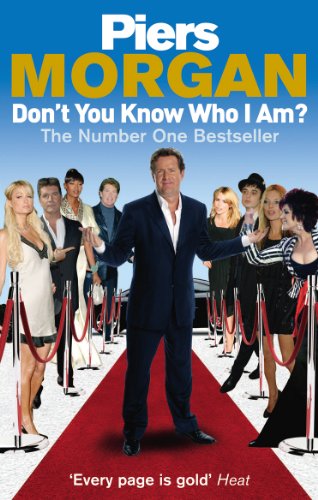 Don't You Know Who I Am?
by Piers Morgan

Out of Stock
$17.49
inc. GST
Let me add another to the list: the moment I sang a duet to the the "Macarena" with Timmy Mallett, live to millions of people...'Sacked from his high-profile job as a national newspaper editor, Piers Morgan dived helplessly into the world of celebrity.
Very Good
Only 0 left

Don't You Know Who I Am? Summary

Don't You Know Who I Am?: Insider Diaries of Fame, Power and Naked Ambition by Piers Morgan

'They say you can always remember where you where when pivotal moments happen, such as losing your virginity or Elvis dying. Let me add another to the list: the moment I sang a duet to the the "Macarena" with Timmy Mallett, live to millions of people...' Sacked from his high-profile job as a national newspaper editor, Piers Morgan dived helplessly into the world of celebrity. But even twenty years of commenting on the lives of the rich and famous couldn't prepare him for the extraordinary world he uncovered... A riveting, scandelous and brutally honest account of one man's quest for celebrity, Don't You Know Who I Am? lifts the lid on the egos and outrageous behaviour of everyone from Paris Hilton to Cherie Blair, Kate Moss to the legend that is the Hoff.

Don't You Know Who I Am? Reviews

"Reading this book really is like peering into Morgan's head. But it's a fascinating head - its contents are clever and silly, sharp and gullible, occasionally incredibly funny. I'd say he has another bestseller on his hands." -- India Knight * Sunday Times *
"Every page is gold" * Heat *
"A typically ribald account of life both making the news and reporting it, as wildly implausible and riotously entertaining as the man himself" * GQ *
"He is a very funny writer" -- Lynn Barber * Daily Telegraph *
"Enjoyably revelatory and very good fun" * Observer *

Piers Morgan was born in 1965. He studied journalism at Harlow College, starting his career in local newspapers and going on to edit his own showbiz column, Bizarre for the Sun. Rupert Murdoch made him Editor of the News of the World in January 1994 and two years later he was headhunted to edit The Mirror, staying there until 2004. He left following a decision to publish photos of British soldiers apparently abusing Iraqi prisoners of war. He has presented two series of Tabloid Tales for BBC2, You Can't Fire Me, I'm Famous, the C4 current affairs show Morgan and Platell, and recently shot to fame in the US as a judge on the top rated America's Got Talent. He is also a judge on the hit UK version, Britain's Got Talent.

GOR000927133
Don't You Know Who I Am?: Insider Diaries of Fame, Power and Naked Ambition by Piers Morgan
Piers Morgan
Used - Very Good
Paperback
Ebury Publishing
2008-03-06
384
0091913926
9780091913922
N/A
Book picture is for illustrative purposes only, actual binding, cover or edition may vary.
This is a used book - there is no escaping the fact it has been read by someone else and it will show signs of wear and previous use. Overall we expect it to be in very good condition, but if you are not entirely satisfied please get in touch with us.