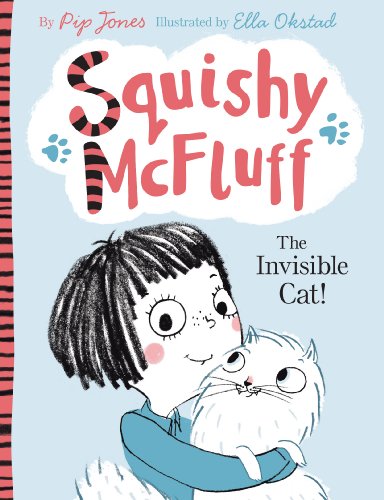 It's Squishy McFluff!' When Ava discovers an imaginary cat in the cabbage patch, she knows she's found a new best friend. Together, Ava and Squishy McFluff get up to all kinds of mischief . Bright new talent Pip Jones gives a hilarious, quirky twist to everyday experiences for readers aged 5+.

'Can you see him? My kitten? Close your eyes tight His fur is so soft and all silvery white Imagine him quick! Have you imagined enough? Oh, good, you can see him! It's Squishy McFluff!' When Ava discovers an imaginary cat in the cabbage patch, she knows she's found a new best friend. Together, Ava and Squishy McFluff get up to all kinds of mischief . . . Told in full colour throughout, this is the perfect stepping stone from picture books to older fiction. Bright new talent Pip Jones gives a hilarious, quirky twist to everyday experiences for readers aged 5+.
"How much mischief can an invisible cat cause? Plenty, if that cat is Squishy McFluff. While playing in the garden one day, a little white girl named Ava spies (or rather does not spy) something invisible. "This marvelous creature was fluffy and tiny, / As cute as a button, with eyes big and shiny, / A tail that swished proudly, first this way, then that. / A fabulous, friendly, invisible cat!" Ava and her new friend chase a pigeon (which gets away). Then she takes him in to meet her mum and introduces him as Squishy McFluff. Mum plays along, feeding Squishy some invisible fish, and all goes well...for a while. There's marker on the curtains, paint on the carpet, and sweaters unraveled--all Squishy's fault. Mum has lost patience with Squishy, but she finds it hard to send an invisible cat away. Happily, Great Grandad Bill visits to sweetly lay down the law. British rhymester Jones' American debut riffs on the well-worn "imaginary friend/pet done it" theme in this early chapter book, the first in a series, but she does it all in rhyming couplets accompanied by Okstad's peppy, pastel-colored pictures. In Book 2, Supermarket Sweep! (publishing simultaneously), Squishy creates mayhem in the market. Little Americans might need a translation or two, but Ava and Squishy will charm them nonetheless. Readers will wish that they had a kitty to blame their misdeeds on when they've acted...naughty." --Kirkus Reviews
"Though Ava is the only one who can see Squishy McFluff's whiskers and silvery white fur, her parents welcome their daughter's invisible kitten into their house. The two are inseparable, and as Squishy only eats invisible treats, he's no trouble at all to have around--that is, until he starts causing mischief. Ava quickly passes the blame for the marker on the curtains, the overturned glass, and the pigeon in the bathroom to her invisible companion. It takes a tactful visit from Great-Granddad Bill for the little girl to understand that poor behavior has consequences, even in pets. When Squishy's supply of invisible fish is threatened as comeuppance, Ava vows to teach him to be good. While she never owns up to her misdeeds, Ava's genuine concern for Squishy reveals that the behavior lesson has been taken to heart. This playful early chapter book will attract emergent readers with its rhyming text, widely spaced lines, and sweet red-and-blue illustrations. Look for book two in this funny British series, Squishy McFluff: Supermarket Sweep!, published simultaneously."
--Booklist
"In a punchy rhyming escapade, debut author Jones introduces an inventive girl named Ava and her invisible cat, Squishy McFluff. When household mishaps coincide with Squishy's arrival, it's time for him to go--until Ava's clever Great Grandad Bill intervenes. Jones's singsong verse is long-winded at times ("He's ever so small, / he just doesn't know better./ He felt very bad/ for unraveling that sweater, / And you must understand/ that kittens are frisky, / He didn't deliberately/ spill Daddy's whisky"), though it gives the story the feel of an epic poem. Norwegian artist Okstad's pink and teal graphics nicely highlight the mischievous goings-on." Available simultaneously: Supermarket Sweep! Ages 5-7.
--Publishers Weekly
Pip Jones lives in East London with her partner, her two daughters and a real invisible cat. She writes a lot. She is the author of four other Squishy McFluff books, several picture books (including Daddy's Sandwich and The Chocolate Monster) and her new series Piggy Handsome is coming out in summer 2017. Ella Okstad returned to her native Norway after graduating where she now illustrates children's books. Squishy is her first imaginary cat.
GOR005668655
9780571302505
0571302505
Squishy McFluff: The Invisible Cat! by Pip Jones
Pip Jones
Squishy McFluff the Invisible Cat
Used - Very Good
Paperback
Faber & Faber
2014-02-06
80
N/A
Book picture is for illustrative purposes only, actual binding, cover or edition may vary.
This is a used book - there is no escaping the fact it has been read by someone else and it will show signs of wear and previous use. Overall we expect it to be in very good condition, but if you are not entirely satisfied please get in touch with us
Trustpilot