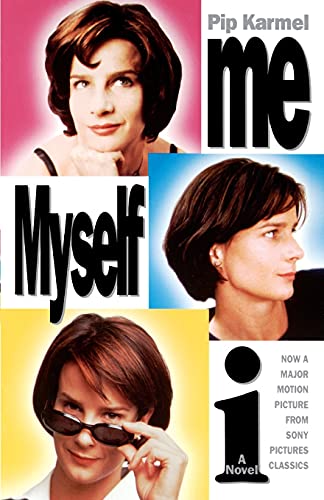 Me Myself I
by Pip Karmel

Me Myself I Summary

Me Myself I by Pip Karmel

What if you could live the "what if" in your life?
Pamela Drury is in crisis. As she enters her thirty-fifth year, she is struck by the realization that she has made a complete mess of her life. Sure, she's traveled the world, has an award-winning career, and owns real estate. So why does she have the overwhelming feeling that she missed the boat to love and happiness? What happened to Mr. Right? Pamela comes to the miserable conclusion that she let him go when she turned down Robert Dickson thirteen years ago.
Racked with regret and at the brink of despair, Pamela magically collides with someone who is about to change her life: herself. The Pamela who did marry Robert Dickson all those years ago....
Pamela No. 2 comes complete with Robert, three children, two goldfish, and a dog. Astonished to meet her alternate self, Pamela is further stunned when Pamela No. 2 vanishes, leaving Pamela stranded in the married life...with funny, revealing, and often poignant consequences.
Australian screenwriter/director Pip Karmel, creator of the internationally acclaimed film Me Myself I, showcases her sparkling talent in this wry and affecting novel.

Pip Karmel wrote and directed the film Me Myself I, which made the first major sales at the Cannes Film Festival in 1999. Previously, she had won an Oscar (R) nomination for her editing work on the movie Shine. Karmel has also written and directed award-winning short films and television. She says she is currently "concentrating on character-driven drama with comedy," something that she achieves with flair in Me Myself I.

GOR010110183
Me Myself I by Pip Karmel
Pip Karmel
Used - Very Good
Paperback
Simon & Schuster
2000-04-01
240
0743406524
9780743406529
N/A
Book picture is for illustrative purposes only, actual binding, cover or edition may vary.
This is a used book - there is no escaping the fact it has been read by someone else and it will show signs of wear and previous use. Overall we expect it to be in very good condition, but if you are not entirely satisfied please get in touch with us.