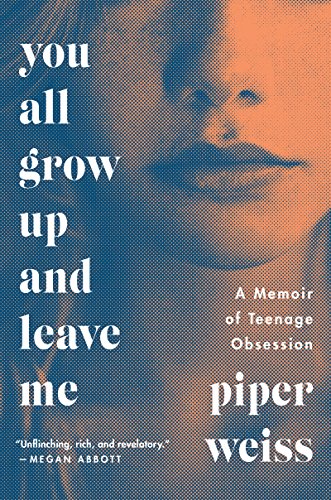 You All Grow Up and Leave Me
by Piper Weiss

Out of Stock
$44.99
inc. GST
But why did she still feel protective of Gary, and why was she disappointed that he hadn't chosen her?

Now, twenty years later, Piper examines the event as both a teenage eyewitness and a dispassionate investigative reporter, hoping to understand and exorcise the childhood memories that haunt her to this day.

You All Grow Up and Leave Me Summary

You All Grow Up and Leave Me: A Memoir of Teenage Obsession by Piper Weiss

Piper Weiss was fourteen-years-old when her middle-aged tennis coach, Gary Wilensky, one of New York City's most prestigious private instructors, killed himself after a failed attempt to kidnap one of his teenage students. In the aftermath, authorities discovered that this well-known-figure among the Upper East Side tennis crowd was actually a frightening child predator, who had built a secret torture chamber-a "Cabin of Horrors"-in his secluded rental in the Adirondacks.

Before the shocking scandal broke, Piper had been thrilled to be one of "Gary's Girls." "Grandpa Gary," as he was known among his students, was different from other adults-he treated Piper like a grown-up, taking her to dinners, engaging in long intimate conversations, and sending her special valentines. As reporters swarmed her private community in the wake of Wilensky's death, Piper learned that her mentor was a predator with a sordid history of child stalking and sexual fetish. But why did she still feel protective of Gary, and why was she disappointed that he hadn't chosen her?

Now, twenty years later, Piper examines the event as both a teenage eyewitness and a dispassionate investigative reporter, hoping to understand and exorcise the childhood memories that haunt her to this day. Combining research, interviews, and personal records, You All Grow Up and Leave Me explores the psychological manipulation of child predators-their ability to charm their way into seemingly protected worlds-and the far-reaching effects their actions have on those who trust them most.

You All Grow Up and Leave Me Reviews

"Brilliant . . . Piper Weiss has crafted a book that marries true crime to memoir. . . . and Weiss shines as a memoirist-seamlessly unveiling the unexpected and the startling, revealing the raw, ragged truth about her conflicted and slightly twisted teenage self." -- Ivy Pochoda, Los Angeles Times
"Intriguing . . . Weiss has a wonderful eye for the evocative detail . . . and a light but effective touch when summing up the zeitgeist." -- New York Times Book Review
"Equal Parts true-crime investigation and self-reflection . . . Bracingly honest and extremely discomfiting, this book is like a riveting episode of Law & Order: SVU set at a Manhattan prep school with the U.S. Open as a backdrop." -- Marie Claire
"Gorgeous, moody, and evocative . . . half coming-of-age story and half exhaustively researched true crime. . . . Weiss's retelling is respectful, eschewing sensationalism for self-investigation, insightful metaphor, and lyrical turns of phrase." -- Vanity Fair
"You All Grow Up and Leave Me is unflinching, rich and revelatory, not just about its twin subjects-the true crime at the heart of the book and the wrenching coming-of-age story that surrounds it-but about the dangers, fragility and piercing beauty of girlhood itself." -- Megan Abbott, bestselling author of You Will Know Me
"A memoir so wholly original and brilliantly written, I feel comfortable saying nothing else in the genre compares. You All Grow Up and Leave Me perfectly marries the tenderness of coming-of-age with the horror of true crime . . . a gorgeous, haunting book." -- Shondaland.com
"There's a true crime story at the heart of this memoir-and a deeply disturbing one at that. But You All Grow Up and Leave Me is also a haunting, evocative, and thoroughly immersive tale that details the thrill and terror of growing up. I loved it." -- Alison Gaylin, bestselling author of If I Die Tonight
"Exquisitely captures the constantly shifting terrain of adolescence and the complicated-sometimes dangerous-politics of relationships between adults and teenagers . . . You All Grow Up and Leave Me is a compulsively readable and beautifully crafted book." -- Kristen Radtke, author of Imagine Wanting Only This
"Into an enthralling true-crime story of a middle-aged tennis coach's fixation on young girls, Piper Weiss has smuggled a tender, introspective, and beautifully written coming-of-age memoir . . . the 'teenage obsession' here brilliantly cuts both ways." -- Teddy Wayne, bestselling author of Loner
"There's a fine line between obsessions that shape us, and obsessions that veer into dangerous territory. In You All Grow Up and Leave Me, Piper Weiss shows how they overlap with a reporter's eye and a poet's heart." -- Michele Filgate, writer and Contributing Editor at Literary Hub
"Dark and brooding yet brisk and eloquently written . . . [Weiss's] vivid coming-of-age narration shines a spotlight on the precarious relationship between teenagers and adults and everything that can go awry in between. A bristling, harrowing journey into the life of a stalker and his unsuspecting victims." -- Kirkus Reviews
"So wildly chilling, you might forget that it's a true story." -- HelloGiggles, Books We Can't Wait to Read in 2018
"Riveting...Although the true crimes and potential crimes of Wilensky are the inciting incidents for Weiss's story, these tabloid headlines are a small part of the whole, a compelling coming-of-age story." -- Chonogram.com

Piper Weiss has served as editor in chief at Levo, editorial director for HelloGiggles, and features editor for the New York Daily News and Yahoo. She is the author of the book My Mom, Style Icon and has written for various publications, including Hazlitt, McSweeney's Internet Tendency, Elle.com, and Refinery29. She lives in Brooklyn, New York. www.PiperWeiss.com

GOR010439115
You All Grow Up and Leave Me: A Memoir of Teenage Obsession by Piper Weiss
Piper Weiss
Used - Good
Hardback
HarperCollins Publishers Inc
2018-03-19
352
0062456571
9780062456571
N/A
Book picture is for illustrative purposes only, actual binding, cover or edition may vary.
The book has been read but remains in clean condition. All pages are intact and the cover is intact. Some minor wear to the spine.