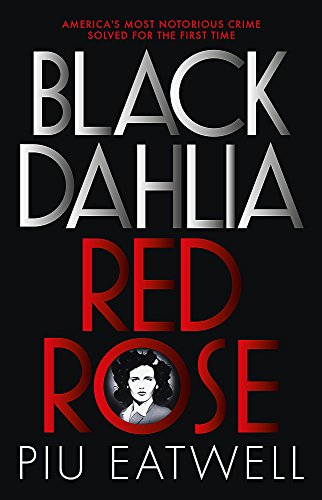 With startling new evidence, this gripping reexamination of the Black Dahlia murder offers a definitive theory of a quintessential American crime.

Black Dahlia, Red Rose: A 'Times Book of the Year' by Piu Eatwell

***Shortlisted for the CWA Dagger for non-fiction***

'A magnificent, meticulous and startling re-examination of a crime that haunts the world's imagination' Geoffrey Wansell, author of An Evil Love: The Life of Frederick West

'Eatwell writes brilliantly . . . [she] has finally offered [Elizabeth] Short a type of belated justice. Her book reads like a thriller' Sunday Times

'A compelling read, in both style and substance . . . A must-read for anyone with an interest in the Black Dahlia - or indeed any fan of the true-crime genre' Rod Reynolds, author of The Dark Inside

'Compulsively readable, impeccably researched and heart-rending at times . . . Superb' Sarah Lotz, author of The Three and The White Road

On 15th January 1947, the naked, dismembered body of a black-haired beauty, Elizabeth Short, was discovered lying next to a pavement in a Hollywood suburb. She was quickly nicknamed The Black Dahlia.

The homicide inquiry that followed consumed Los Angeles for years and the authorities blew millions of dollars of resources on an investigation that threw up dozens of suspects. But it never was solved.

In this ground-breaking book, Piu Eatwell reveals compelling forensic and eye witness evidence for the first time, which finally points to the identity of the murderer. The case was immortalised in James Ellroy's famous novel based on the case, in Kenneth Anger's Hollywood Babylon and Brian de Palma's movie The Black Dahlia.

This is a dark tale of sex, manipulation, obsession, psychopathy and one of the biggest police cover ups in history.

A magnificent, meticulous and startling re-examination of a crime that haunts the world's imagination * Geoffrey Wansell, author of 'An Evil Love: The Life of Frederick West' *
A compelling read, in both style and substance, and one which packs a heavyweight punch in terms of the evidence uncovered and the resolution offered. This is a comprehensive account of the sad and ultimately tragic life of Elizabeth Short, and the web of intrigue that surrounds her death is untangled here in fascinating and painstaking detail. A must-read for anyone with an interest in the Black Dahlia - or indeed any fan of the true-crime genre. * Rod Reynolds *
Eatwell writes brilliantly . . . After decades of cultural appropriation by journalists, novelists and film-makers, Eatwell has finally offered [Elizabeth] Short a type of belated justice. Her book reads like a thriller, but it never loses sight of the real woman whose life was so savagely extinguished' -- Joan Smith * Sunday Times *
Compulsively readable, impeccably researched and heart-rending at times, BLACK DAHLIA RED ROSE deserves a place at the top of any true crime aficionado's bookshelf . . . Superb * Sarah Lotz, author of The Three and The White Road *
Written in a narrative style that evokes the smoky noir of LA in the 1940s, it's a gripping tale featuring a host of colourful characters - from hard-boiled cops and intrepid journalists to wannabe actresses and Hollywood gangsters. It was hard to put down. When I wasn't reading it, I found myself thinking about the Dahlia and her untimely death. After three years of painstaking research, she puts forward a compelling and convincing conclusion. It's a must-read. * Daily Record *
A meticulously researched work that is delivered with all the punch, pace and suspense of the finest noir thrillers . . . Eatwell never forgets the tragic figure at the heart of her story, while emphasising the callousness of the post-second World War era in which she was so brutally murdered' * The Irish Times *
Piu Eatwell applies rigorous deductive reasoning . . . The characters she encounters are straight from the sets of film noir . . . She pursues her suspect to the nightmarish end, uncovering corruption of every kind, and offers a convincing solution. -- Lillian Pizzichini * Mail on Sunday *
Eatwell's historical crime study is an expansive work that delves into the broader culture of post-war Los Angeles . . . her immersive style is filled with camera-ready period detail * New York Times *
'[Eatwell] evokes the Los Angeles era in which the murder was committed with pinpoint accuracy and feeling . . . she meticulously draws together in her investigative web all the necessary threads and makes the affair clearer despite its inherent complexity. Probably the final book on the case and the best, as the author's exemplary research collects all available data and allows the reader to make his mind up. -- Maxim Jakubowski * CrimeTime *
I adored this book. It really does plunge the reader into the grime behind the glamour, bringing to gory life the moral repugnancy of a post-war Gomorrah known as LA. The reader is utterly transported - so close to the action that it felt as though I was riding in the squad car, watching the grotesque autopsies and taking knuckle-dusters to head from the Gangster Squad. As far as I'm concerned, it's case closed. Absolutely masterful. The perpetrator of whichever unsolved case Piu Eatwell tackles next should be very nervous. * David Mark, bestselling author *
Readable and convincing * The Times *
Piu Eatwell is the author of BLACK DAHLIA, RED ROSE and The Dead Duke, His Secret Wife, and the Missing Corpse and has produced and researched historical documentaries for the BBC and other channels, including the widely acclaimed film Charles Manson: The Man Who Killed the Sixties. She divides her time between Paris and London with her husband and three children.
GOR008813400
9781473666320
1473666325
Black Dahlia, Red Rose: A 'Times Book of the Year' by Piu Eatwell
Piu Eatwell
Used - Very Good
Hardback
Hodder & Stoughton
20170928
368
N/A
Book picture is for illustrative purposes only, actual binding, cover or edition may vary.
This is a used book - there is no escaping the fact it has been read by someone else and it will show signs of wear and previous use. Overall we expect it to be in very good condition, but if you are not entirely satisfied please get in touch with us
Trustpilot